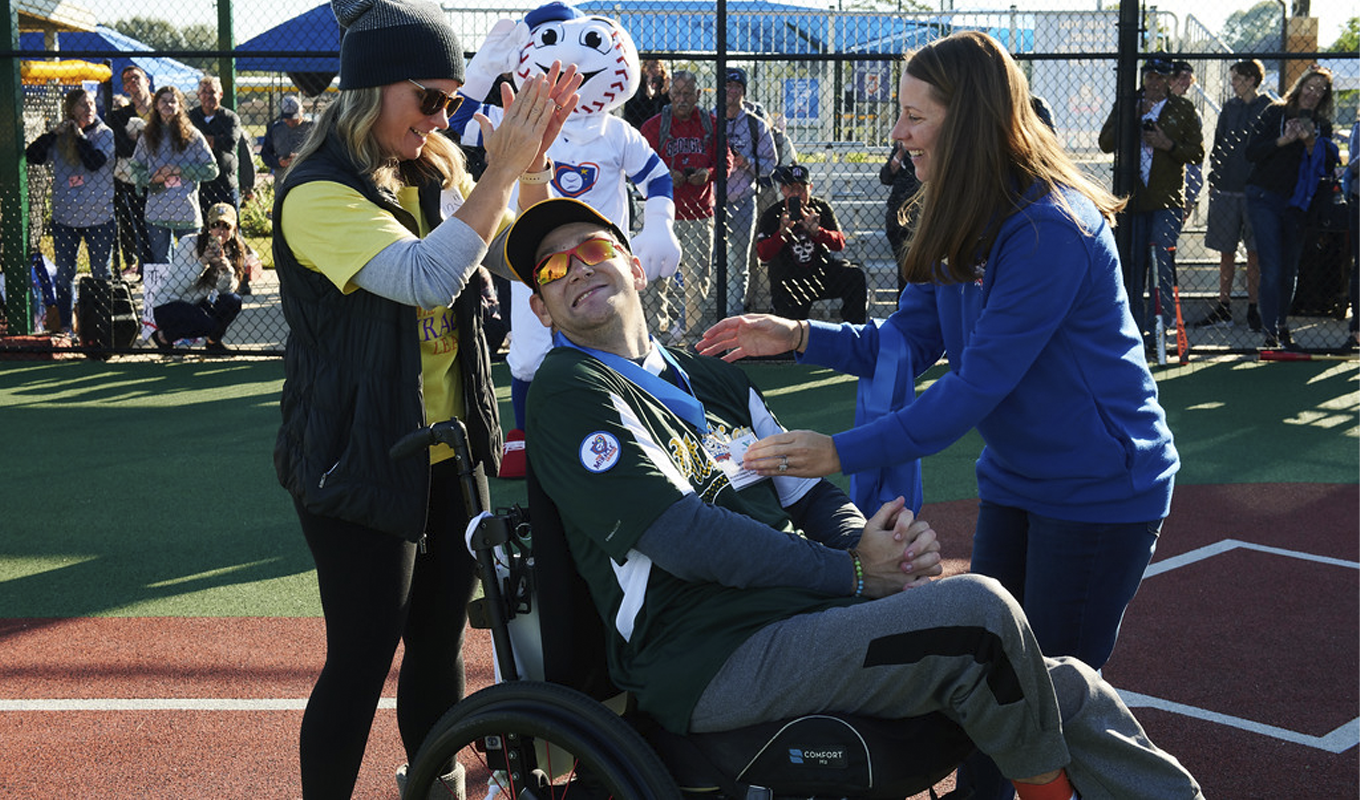 Why SMI? 'From day one, Samaritan was there for us'

Little leagues across the country are in full swing, and that happily includes children with disabilities thanks to people like Stephanie Davis.

As national program director of The Miracle League, Stephanie, who lives with her husband, Brian, and their children near Athens, Georgia, is able to combine her love of sports and of working with people who have special needs. In the process, she shows the love of Christ by helping children with disabilities play baseball “no matter their ability.” About 50,000 children, with an equal number of personal “buddies,” are involved in 320 local Miracle Leagues in the U.S., Canada, and Mexico.

Batter up: Miracle League (MiracleLeague.com) is a nonprofit organization that provides opportunities for children with special needs to play baseball. In the late 1990s, the Rockdale Youth Baseball Association in Conyers, Georgia, had begun inviting children who otherwise couldn’t join a typical team to play their own games with accommodations and special rules. However, it was soon apparent that special facilities were needed for those with wheelchairs, walkers, or braces to be able to navigate the bases and field. The solution to these problems came in 2000 with the birth of The Miracle League.

“The players need a fully accessible, rubberized surface and complexes that are also fully accessible so they can get from the parking lot to the field,” Stephanie says.

Each player has a “buddy” who mirrors him or her, which includes adults in some cases. A buddy may push a wheelchair around the bases or hit a ball for them.

“Whatever the player’s special need might be, the buddies are there to protect them and help them play the game,” Stephanie says.

Most Miracle Leagues are open to players ages 4 and up of all abilities. Players typically qualify for a Miracle League “if you wouldn’t qualify or be able to safely participate in a youth baseball program.”

‘So inspired’: Stephanie became aware of Miracle League when HBO’s Real Sports aired a report on it in 2001.

“I did some research and found the organizers of the original league, and we were just so inspired that we decided to replicate the idea and start the second local Miracle League, which was in Myrtle Beach, South Carolina, in 2002.”

It was perfect for Stephanie, who was then 20 years old and had worked with individuals with special needs throughout her life and was always on the lookout for new ways to help them.

“I just thought, ‘Everybody needs this opportunity,’ and to bring these two things together was really a dream for me.”

She believes she was “blessed abundantly” by the Lord as she was involved in sports growing up.

“I couldn’t imagine not having those priceless experiences, so it is now my mission to use the gift that God gave me to provide everyone that opportunity to play no matter their ability. I try my best to show the love of Jesus to everyone I serve. I feel like this is the calling that God has given me.”

Consulting: Stephanie’s job is to consult with local organizations as they establish a local complex and league.

“That could be an individual, company, or an already-established nonprofit,” she says.

The cost of installing a complex depends on the location and site.

“If you had a perfect site to grade, the cost would be about $400,000 to $500,000,” Stephanie says. “That would include grading, asphalt, a rubberized surface on top of the asphalt, fencing, dugouts—everything you would need for the field itself.”

Some of the most common partnerships are with local YMCA chapters or with a city or county municipality that oversees parks and recreation.

“From there, they typically organize some type of nonprofit that raises the money locally,” she says. “All money does stay local. We consult with them on best practices of how to build the field and run the program without having to reinvent the wheel. We bring a lot of different avenues and benefits to the table to help them.”

“Each league looks a little bit different depending on who they’re partnered with and what part of the country they’re in,” Stephanie says. “But we do encourage them to run both spring and fall seasons, so it would kind of mirror what most youth baseball associations already do. That makes it a lot easier for parents who have multiple kids in multiple programs.”

Many leagues do extra-innings events throughout the year, such as holiday gatherings, support groups for parents, or dances for the children.

“The pandemic and shutdown affected all of us, but it was really devastating physically, emotionally, and mentally to families with special needs because a lot of the children’s therapy is in person and typically done daily,” Stephanie says.

“Our local leagues got really creative. They offered virtual gatherings. They did small-group and family clinics at the fields. They had a lot of drive-bys, whether it would be to visit the kids at their house or bring our mascot to their yard or have drive-by parades.

“A lot of our leagues went beyond the realm of baseball and started delivering food or medications to families by a lot of their volunteer supporters. They supported them with gift baskets and activities to help keep the kids busy.”

Most leagues were back in action by last year’s fall season and Stephanie believes the majority were getting ready for a spring season.

Fresh air and joy: Miracle League participation has both emotional and physical advantages.

“It brings so much joy to families because we are providing the players a way to be included in a team sport, which has never happened for them before,” Stephanie says. “Most of the joy we see is from being with friends and coaches and buddies, as well as spending time outside. They are getting exercise and fresh air, but most importantly they have a place to belong. That’s where we see the most joy: their experience with others, being involved instead of secluded—just the joy of achieving something, whether it be hitting a ball, running the bases, or scoring a run.”

Michael Miller is Editor of the Samaritan Ministries newsletter.