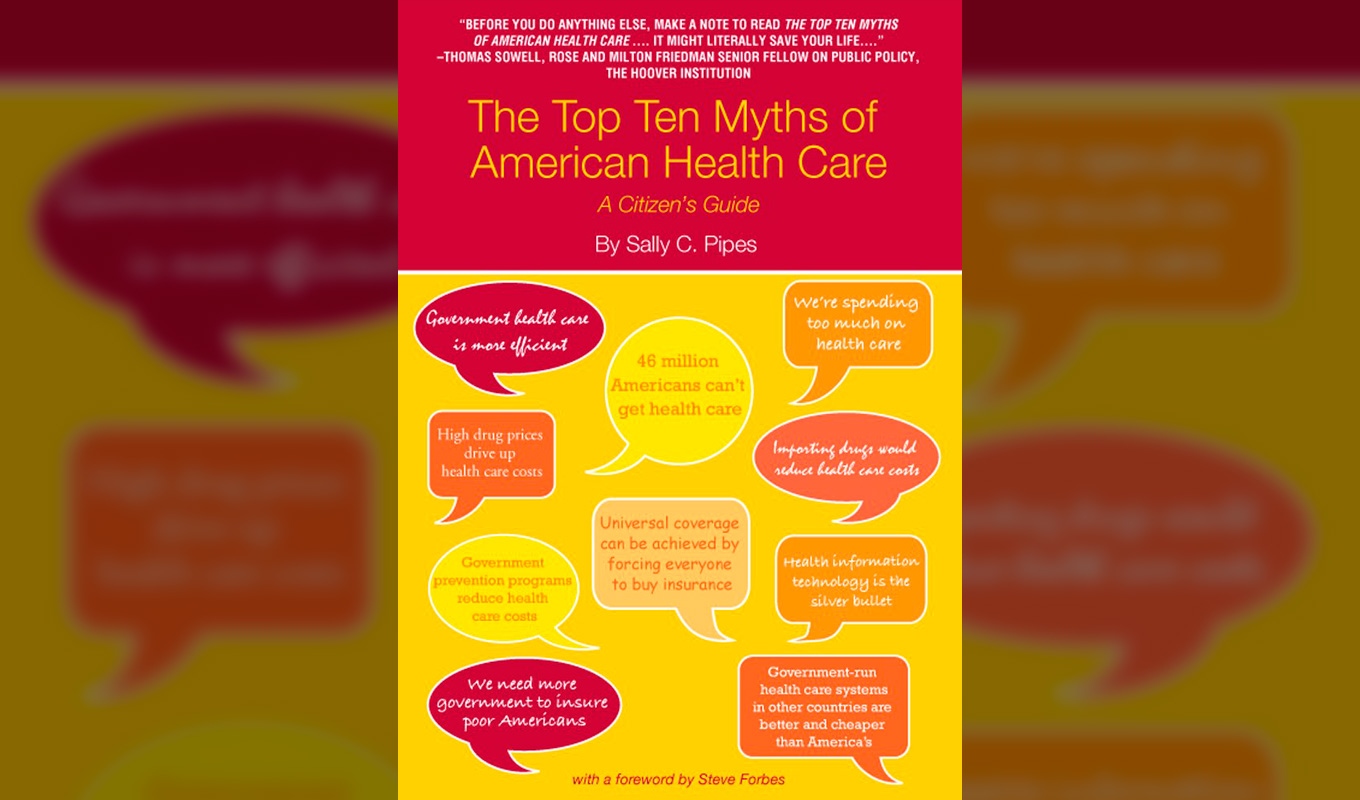 How to refute myths about 'Medicare for All'

"It ain’t ignorance that causes the trouble in the world. It’s the things people know that ain’t so."

Have you ever felt hesitant to jump into a water cooler conversation about heath care? The topic is coming up again with “Medicare for All” in the  headlines.

To get up to speed check out Sally Pipes’s excellent book, The Top Ten Myths of American Health Care. Though written several years ago in the run-up to the Affordable Care Act, it’s still one of the best resources available. When it comes to health care, the more things change, the more they stay the same.

Here’s a countdown of the myths:

10. Government-Run Health Care Systems in Other Countries are Better and Cheaper than America’s

9. Health Information Technology Is a Silver Bullet for Reducing Costs

6. Universal Coverage Can Be Achieved by Forcing Everyone to Buy Insurance

2. We’re Spending Too Much on Health Care

After reading Pipes’s book, you won’t feel at a loss when someone says that other countries’ health care systems are “universal” and a model the U.S. should aspire to.

You’ll anticipate the erroneous claim that Americans’ life expectancy trails behind other countries. Some stats do show a lag, but only because of car accidents and violent crime, not health care.

Infant mortality statistics are often cited as well, but other countries measure it in ways that keep their rate artificially lower.

Stats attempting to measure the effectiveness of health care are notoriously tricky and easily manipulated, but there’s plenty of evidence the U.S. remains the world leader. We produce more than half of the world’s health care technology. We drive innovation and spend five times as much as the European Union on research and development. Dignitaries and the wealthy travel from all over the globe for specialized care in the U.S.

Another critical point driven home by The Top Ten Myths of American Health Care is that coverage does not equal care. The claim that 45 million Americans don’t have insurance is repeated ad nauseum, but the number is way off and misses the point. It counts non-citizens and people switching health care plans. Plus, millions of people who have above-average incomes deliberately choose to be uninsured, and millions below poverty thresholds don’t bother to enroll in government programs. Furthermore, many uninsured people are happy with their access to care and many of the insured complain about access because of coverage and network limitations. Studies indicate that those in Medicaid actually have worse access and health care outcomes than the uninsured.

The Top Ten Myths will also disabuse you of the notion that universal coverage is even possible, let alone desirable. Countries with so-called universal health care inevitably end up with shortages and then secondary private markets and insurance spring up to address the access problems. Plus, the promised cost savings and efficiency gains never materialize. Health care costs soar, tax burdens increase, and the wait times get longer.

According to the Frasier Institute, Canadian families pay almost a $1,000 per month in taxes for “universal” health care, but many can’t find a family doctor. On average they wait four weeks for a CT scan or ultrasound, 10 weeks for an MRI, and 41 weeks for medically necessary surgeries.

It’s even worse for England’s National Health Service, which Pipes says is imploding. Britons languish for 12 hours in the ER before being admitted and 30,000 died in 2017 waiting for critical treatment. Tens of thousands of open positions for doctors and nurses remain vacant. On top of all this, the total spending has doubled over the last 18 years.

Not only is it naive to be looking to other countries’ health care systems, but we should also realize the U.S. system is already highly regulated.

This state of affairs causes Sally Pipes to ask questions that should be obvious. Do we really want more government regulation? Do we want our health care to look like the IRS or DMV?

The number one myth about care is that government somehow makes it more efficient. There’s plenty of evidence to refute it, but the kicker is that we don’t really need books, studies, stats, and charts.

Follow the lead Thomas Sowell, one of America’s greatest economists, who after a career of marshaling evidence against economic fallacies, just came out and said it plainly:

Just ask yourself whether you are satisfied with the highly regulated health care you currently have.

How long does it take to get an appointment? Are the services you want quickly and easily accessible? Can you get a price before service or understand the billing that comes long after?

Recently I emailed the Samaritan Ministries staff asking if they had experienced long wait times for health care. The frustration was palpable in the flurry of responses I got back within minutes.

I encourage you to take a similar informal survey of your friends. Just ask them how long it takes to get in to see a doctor.

Wait times are already two to three weeks. In the age of smart phones and Google, Amazon and Uber, this is unacceptable. But try to imagine what it would be like to wait four to six weeks or even longer to see a doctor under “Medicare for All.”

Time is money, and when it comes to health care, that’s a price we can’t afford to pay.