Callers to Dan Celia’s Financial Issues radio program wanted to know what to do about health care costs—and so did Dan, whose show goes into 80 million homes.

Health insurance costs were rising after the Affordable Care Act went into effect, and the Christian financial advisor needed to know what to do for his own family and what to tell his listeners.

He knew about health care sharing because some friends had been using it.

“I was always fascinated by it,” he says. “I knew my premiums were going up dramatically. I said, ‘It’s time. It’s really time that we take a long, hard look at health care sharing ministries.’”

He placed calls to the three largest ministries as part of his research, but only one called back—Samaritan Ministries.

“I said, ‘I’d like to go through a vetting process, see what you guys are all about, see if you have some interest in coming alongside my ministry,’” he says.

Samaritan invited him to Peoria, showed him the facility, and explained how the ministry handles health care sharing.

After taking some time to study, think, and understand, Dan and his wife, Yvonne, became members in January 2015.

“This is what God intended, getting back to the book of Acts,” he says. “I still think it’s amazing how well it works.”

Yvonne, who is a nurse and was working in hospital administration, was skeptical about how health care sharing works. 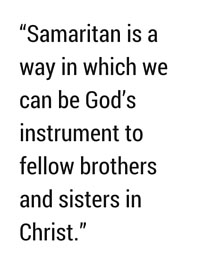 Dan says he understands why people would be hesitant to join a health care sharing ministry, but it helps to put it in the proper context of the Christian life.

“I always tell them, ‘We always talk about the good old days, what the church ought to be doing. Here, this is it, this is what it’s all about, this is exactly what we’ve read about in the Bible.’

“The biggest fear is, ‘You mean I’m depending on somebody I don’t even know to write a check to me? Are you out of your mind? I can’t depend on my next door neighbor to return my rake.’

Dan even thinks that health care sharing can play a role in a U.S. revival.

“If we are ever going to have revival in this country, then we’re going to get back to where God’s people are dependent on God’s people,” he says. “Samaritan is a way in which we can be God’s instrument to fellow brothers and sisters in Christ. My wife and I have taken it upon ourselves to look at the ministry that way and take great joy in praying through the prayer list we get every month. I tell people that on the radio all the time.

“We also always give to a Special Prayer Need because we have this attitude that we would certainly want people to do it if we were in that place. And my wife writes notes to people we send shares to. She feels connected to a part of the Body of Christ she doesn’t even know.”