The Bread of Life in the House of Bread 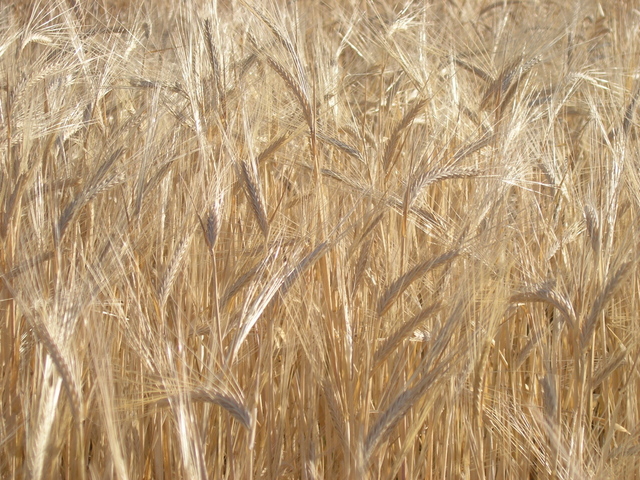 At the beginning of the book of Ruth, an Israelite family leaves Bethlehem to sojourn in Moab. The reason for this is that there is a famine in the land:

In the days when the judges ruled there was a famine in the land, and a man of Bethlehem in Judah went to sojourn in the country of Moab, he and his wife and his two sons. The name of the man was Elimelech and the name of his wife Naomi, and the names of his two sons were Mahlon and Chilion. They were Ephrathites from Bethlehem in Judah. They went into the country of Moab and remained there (Ruth 1:1-3).

These seemingly small details are not incidental, and there are in fact two big ironies taking place. One is that they are leaving the land of promise, the place that Yahweh gave to the descendants of Abraham for an inheritance, and they are going down into Moab, which is one of Israel’s traditional enemies. In other words, the land of blessing and of plenty has become barren, and this family thinks they can no longer survive, while the land outside the covenant promise at that time has enough food to spare to sustain them. Why is this so? The first verse of the book tells us that this episode occurred in the days of the Judges. If you go back and read the Book of Judges, you see that Israel was serially disobedient, so the famine in Ruth occurs when God’s people are rebelling against Him.

But there is a second, even greater irony. The name Bethlehem means “house of bread.” Elimelech’s family was from the House of Bread, but they end up leaving because there is not enough bread there.

At the end of the story, Naomi, by this time widowed and having lost both her sons, returns with one of her daughters-in-law, Ruth, to the House of Bread. It is harvest time, and Ruth begins to glean in Boaz’s field. But such is God’s blessing on her and on Naomi that Ruth, who is expecting to glean just enough to give her and her mother-in-law a chance of survival, is given abundance by Boaz. The book then closes with the two of them marrying and having a son, Obed, who is the grandfather of David—also a Bethlehemite. One of the many points of the book is that the House of Bread will not remain empty, but that God will fill it abundantly. It starts off with famine and sorrow, and ends with plenty and joy.

Fast forward just over a millennium, and there is another famine throughout all Israel. Only this time the famine is not physical, but spiritual and moral. Real belief is scarce. Unrighteousness abundant. The elite are so corrupt that John the Baptist describes them as a “brood of vipers.” And into this spiritual and moral famine comes this:

In those days a decree went out from Caesar Augustus that all the world should be registered. This was the first registration when Quirinius was governor of Syria. And all went to be registered, each to his own town. And Joseph also went up from Galilee, from the town of Nazareth, to Judea, to the city of David, which is called Bethlehem, because he was of the house and lineage of David, to be registered with Mary, his betrothed, who was with child. And while they were there, the time came for her to give birth. And she gave birth to her firstborn Son and wrapped Him in swaddling cloths and laid Him in a manger, because there was no place for them in the inn (Luke 2:1-7).

The Child is “the Son of David, the Son of Abraham” (Matthew 1:1), and He is born into the city of David. It is the same city that Naomi left and returned to with Ruth all those years before—Bethlehem, the House of Bread. Is this an incidental detail? Is anything in the Bible incidental? What we are meant to understand is that the House of Bread is once again being filled, only this time God is filling it, not with bread which perishes, but with One Who would later say this of Himself:

“I am the Bread of Life; whoever comes to Me shall not hunger, and whoever believes in Me shall never thirst” (John 6:35).

Jesus, the Bread of Life, was therefore born into the House of Bread in the midst of a spiritual and moral famine.

Fast-forward another two millennia, and we find ourselves living in a situation not unlike the time Jesus entered. Once again there is a famine in the land, and once again the famine is not physical, but spiritual and moral. Many of our religious and political elite are no doubt corrupt enough to warrant John the Baptist’s “brood of vipers” treatment. Is there a famine of righteousness? Well, there’s Obergefell vs. Hodges. Is there a famine of morality? Well, Planned Parenthood lives on. Is there a famine of wisdom? Well, the cost of maintaining the welfare/warfare state is edging the U.S. government debt closer to the $20 trillion mark.

On the other hand, there are Christians who don’t seek to engage in political, social, and cultural solutions, because they apparently believe Jesus is not much interested in politics, society, and culture. Since His Kingdom is “not of this world,” we shouldn’t attempt to bring Jesus into the public square.

I think both approaches are refuted by the Incarnation of Jesus—the coming of the Bread of Life into the House of Bread. The spiritual and moral famine in the land in Jesus’ day could not be filled by political, social, and cultural endeavors alone, but only by the coming of the Son of God into the world. Likewise, the spiritual and moral famine in our day can only be filled by Jesus. We might see some minor political, social, and cultural successes by our own endeavors, but real change—the ushering in of righteousness, morality, and wisdom—will only come when we repent and trust in Yahweh to guide us—to guide our politics, our society, and our culture.

The fact that Emmanuel—God with us—entered His own creation and proclaimed that “the Kingdom of Heaven was at hand” shows that though His Kingdom is not of this world—that is, it doesn’t emanate from here and isn’t built on the same principles as worldly kingdoms—His intention was to bring His Kingdom into this world. Why else would He teach us to pray, “Thy will be done on Earth as it is in Heaven”? We are to pray and work for all things—including the political, social, and cultural—to be brought under His rule on Earth.

God’s Son—the Bread of Life—was born into the House of Bread at a time when the world was famished—famished for righteousness, famished for morality, and famished for wisdom. We, too, are in midst of a spiritual and moral famine, caused in part by our seeking for solutions without recourse to God, or by our insisting that God isn’t much interested in rebuilding our collapsing civilization.

As we celebrate the Incarnation of the Son of God later this month, let us therefore remember Him in all His fullness, trusting that He is not just Lord over individuals and the Church, but also politics, society, culture and … well, everything, and that just as He had the power to turn the world upside down 2,000 years ago, He has the power to turn it right side up today:

“For a Child will be born to us, a Son will be given to us; And the government will rest on His shoulders; And His Name will be called Wonderful Counselor, Mighty God, Eternal Father, Prince of Peace. There will be no end to the increase of His government or of peace, on the throne of David and over His kingdom, to establish it and to uphold it with justice and righteousness from then on and forevermore. The zeal of the LORD of Hosts will accomplish this” (Isaiah 9:6-7).