Researchers say breast cancer screening and treatment are too aggressive

“You’ve got cancer” may be the most dreadful words you could ever hear from a doctor. Among the many questions patients often wrestle with are these two: What more could have been done to prevent this? What is the most aggressive treatment available now?

Some doctors and researchers say that the prevailing detection and treatment strategies are actually too aggressive. They cite evidence that people are being harmed by treatment for something that never would have caused a problem.

“The problem is, we all harbor abnormalities, and our tests are increasingly able to find them, yet most of these abnormalities will not go on to cause disease,” Dr. Gilbert Welch said in a 2011 interview. “But because clinicians don’t know which will and which will not, we tend to treat everybody. That means we are treating those who cannot benefit because there’s nothing to fix, and these people can be harmed.”

Welch is a professor of medicine and director of the Center for Medicine and the Media at the Dartmouth Institute for Health Policy and Clinical Practice. He’s the author of a trio of books on the topic: Should I Be Tested for Cancer: Maybe Not and Here’s Why, Overdiagnosed: Making People Sick in the Pursuit of Health, and Less Medicine, More Health: 7 Assumptions that Drive Too Much Medical Care. (Free sample chapters on Kindle)

Welch and others in the medical community are saying that some treatments, especially for cancer, are causing people to experience stress and cost that is unnecessary. Furthermore, they argue that some people are dying sooner than they should, and the treatment deserves the blame, not the disease.

Breast cancer is one area where it has been difficult to keep up with changing and conflicting recommendations about screening. 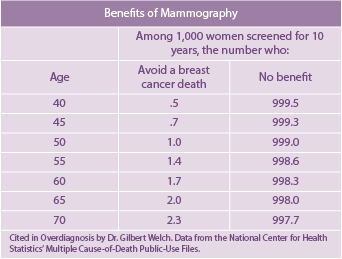 For years women were strongly encouraged to have annual mammograms starting at age 40. But it is this idea of treating what doesn’t need to be treated that prompted the U.S. Preventive Services Task Force to revamp their guidelines surrounding mammography screening in 2009. The debates have only become more complex and intense since then.

Controversy surrounding mammograms goes back decades, but recent articles in the New England Journal of Medicine and the Journal of the American Medical Association concluded that widespread mammogram screening results in overdiagnosis and overtreatment.

The reasoning goes like this. More mammograms means more small, “clinically irrelevant” tumors are found, but there has not been a decline in the detection of the large and dangerous cancers. It appears mammography isn’t helping us prevent advanced cancers or having any effect on breast cancer mortality.

A follow-up article in JAMA Oncology stated that mammography screening and overdiagnosis leads to “potentially harmful procedures and therapies that have considerable psychosocial impacts on women.” It’s one thing to go through chemotherapy and radiation if those treatments really do make the difference between life and death, but whether they do is the question that is being asked more pointedly.

Instead of making one-size-fits-all recommendations, the 2009 guidelines issued by the Preventive Services Task Force simply encourage women ages 40-49 to talk with their doctor about screening: both the benefits and risks of it. Women ages 50-79 are encouraged to screen less often, every two years: “Beginning mammography screening at a younger age and screening more frequently may increase risk for overdiagnosis and subsequent overtreatment.”

Obviously it makes a huge difference whether your doctor tends to be more or less aggressive about screening and treatment. It comes down to judgment calls you and your doctor have to make at various stages. No matter which way you decide, it should be a fully informed decision, but that’s the challenge. 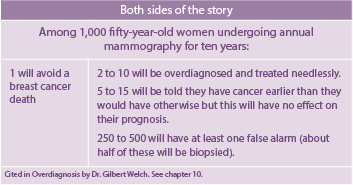 The medical terminology of breast cancer can be bewildering. There are many types and subtypes; and many Latin words are used. At least the theoretical distinction between “invasive” and “non-invasive” is intuitive: Some cancer is dangerous because it will spread and become life-threatening, while some can remain harmless for decades.

One of the most common types of non-invasive breast cancer is known as “ductal carcinoma in situ,” usually referred to by the acronym DCIS. Ductal refers to the location in the milk duct, carcinoma means cancer, and in situ means it remains “in place.” That is, it is not likely to spread.

Prior to the push for mammography screening, DCIS accounted for only 3 percent of cancer diagnoses. With increased screening, it is estimated that between 20 and 25 percent of screen-detected cancers fall under this category. There will be another 60,000 cases of DCIS diagnosed in 2017, and by 2020 there will be more than 1 million women living with that diagnosis.

Laura J. Esserman, a breast cancer surgeon at the University of California, San Francisco, and director of the Carol Franc Buck Breast Cancer Care Center, goes so far as to say that “DCIS is in many ways a disease that we created because of screening.”

Dr. Esserman has challenged the status quo in many ways. In a New York Times profile, she recommended against biopsies and lumpectomies when others would go ahead. She embraces the categorization of some breast cancer as “stage zero” and recommends a wait-and-see approach. Some of her patients have decided not to have surgery after getting a second opinion from her.

She also has published research pushing for greater use of MRIs for detecting cancer and monitoring treatment of cancer. The hospital where she works is the first in the nation to start using a new method for marking exactly where to cut for lumpectomies. Perhaps the most remarkable thing about Dr. Esserman is her reputation for going far beyond typical doctor-patient engagement. She is known for spending hours explaining possibilities, treatment options, and the reasons for her recommendations. She even sings to her patients as they are being put under anesthesia.

The development of different diagnostic technologies is really what is shaking up the status quo. Digital mammograms, ultrasounds, MRIs, and thermography are some of the new tools now playing a role in helping find breast cancer.

Ultrasounds can’t image the whole breast or deep areas like mammograms can, nor can they show calcifications, which are indications of problem areas. But ultrasounds are helpful in certain cases for distinguishing between a fluid-filled cyst and a solid mass.

There is also a technique called elastography, which uses ultrasounds in a new way. When a suspicious area is found with a first ultrasound, then pressure is applied to the breast and another ultrasound is done. A computer program compares the images to calculate elasticity. If the lump is hard and inflexible, it is more likely to be dangerous.

MRIs are often used to help map out the size and location of a tumor. Sometimes MRIs are used to guide a biopsy needle more precisely. Sometimes a biopsy result indicates a larger tumor than a mammogram, and an MRI is done to help make a decision about how much tissue should be removed.

Thermography is infrared imaging that detects heat and inflammation. Tumors need nutrients to maintain their size or accelerate growth, and thermography can detect changes in bloodflow. Some in the medical community maintain that thermography has the potential to become the new standard for breast cancer screening.

Even though cancer involves rapid multiplication of cells, it can remain very small and undetectable for a long time, but then quickly become a serious health problem.

Dr. Philip Getson, who has been a medical thermographer since 1982, says, “Since thermal imaging detects changes at the cellular level, studies suggest that this test can detect activity eight to ten years before any other test. This makes it unique in that it affords us the opportunity to view changes before the actual formation of the tumor. Studies have shown that by the time a tumor has grown to sufficient size to be detectable by physical examination or mammography, it has in fact been growing for about seven years achieving more than twenty-five doublings of the malignant cell colony. At 90 days there are two cells, at one year there are 16 cells, and at five years there are 1,048,576 cells—an amount that is still undetectable by a mammogram. At eight years, there are almost 4 billion cells.”9

It is important to realize that, no matter what diagnostic tool is used, it will always come down to judgment calls about whether to have a biopsy, surgery, or treatment. It is helpful that some in the medical community are recognizing that the relentless “screening saves lives” campaigns were too simplistic.

Wise screening saves lives. What constitutes wise screening? There are many aspects. For starters being realistic about the known limitations of screening is important. So is an engaged patient and expert medical professional working together. Like anything else in life, frank discussion and debate is healthy.