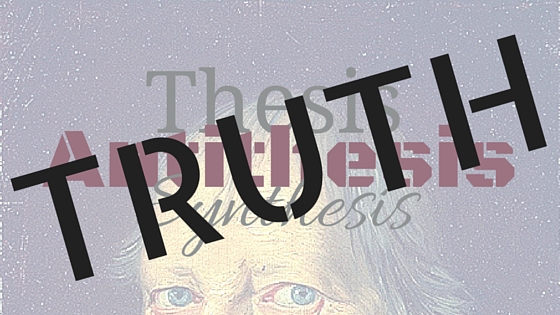 Part 1 can be read here.

Last month, I tried to identify the cause of many of the major cultural and societal changes that have come upon us over the past century or so, and I made the case that what we are actually seeing is Hegelian Dialecticism in action. This idea, from the 19th-century German philosopher Georg Hegel, proposes a marketplace of ideas (thesis and antithesis) which tend to compete with one another to produce a new idea (synthesis).

Now this idea makes perfect sense in relation to subjective opinions. For example, if a business is formulating a strategy for growth, it is often the case that an idea will be presented, which is then opposed by another model. At the end of the discussions, what you often find is that the final strategy is a synthesis of both. However, the problem with Hegel’s philosophy is that it takes what is true of those kind of subjective decisions, and applies the concept to absolutes. What you are left with is the idea that there is no such thing as right and wrong, just propositions A and B, which argue it out until a compromise—proposition C—is reached.

This has three great ramifications. First, it destroys the notion of objective truth. Second, it suggests a world that is in permanent flux, with no moral absolutes to anchor our lives and societies. And third, this model is actually used by those who desire constant change to achieve their own ends. In other words, they deliberately manufacture situations and manipulate language to achieve a clash between traditional, established values (thesis), and progressive, liberal values (antithesis), with the goal being to reach a compromise (synthesis). That compromise then forms the starting point for the next stage-managed clash. So bit by bit they keep us moving along to embrace new changes and new realities, each one of which takes us further and further away from stability, tradition, and accepted Christian values.

We can see this strategy in action in the current transgender/restroom shenanigans. The end goal for the left-liberals is nothing less than the complete obliteration of the distinctions between male and female in language, speech, and even in thought. However, rather than openly expressing what even now might be met with resistance from the majority, they have set up a thesis/antithesis scenario. So two minutes after Obergefell vs. Hodges, and while the public was still adjusting to that, they brought forward their new cannon fodder on the one side—for instance, Bruce Jenner and several emotive cases of “people trapped in the wrong body”—and started playing them off against the predictable chorus of shrill voices on the other side.

The change agents may win that particular battle, because they have fine-tuned the art of Soft Power Emotionalism as a means of coercion. Set against shrill opposition, Soft Power Emotionalism will end up convincing the majority of people to compromise the beliefs they once held, and accept views they would have once thought radical and insane. And then, once again, while we are still talking about that, they will move on to the next front, setting up their next thesis/antithesis (whatever that is), which will be yet another step on the way to their Cultural Marxoid goal of flattening the distinctions between male and female.

How can we respond? Here are a few things I think we would do well to remember:

Remember that neither Hegel, nor those foisting insanity upon us, made the world. God did! And although humans might want to pretend that A does not equal A, the fact is that it does, and it always will. The truth, it is said, will come back to bite, and it is simply not going to be possible for humans to live very long in complete denial of basic, objective truths, such as the biological sex of a human being. How long can the folly be sustained? I’m not sure, but it’s obvious that a society which rejects objective truth cannot live with the consequences for very long.

Sorry to say, but in many churches the way people worship God looks a lot like they really do see Him as the worldly caricature of a doddery old man sitting on a cloud. Remember that, besides being our Father, He is also a holy, majestic and awesome God, and that when you come to worship on the Lord’s Day, you are not just coming into your local congregation to meet with others; you are standing in the presence of your Father, the holy, majestic, and awesome God: “But you have come to Mount Zion and to the city of the living God, the heavenly Jerusalem, and to innumerable angels in festal gathering” (Hebrews 12:22). If all the Christians in all the churches throughout America started worshipping God like they really believed that—with a mixture of great awe and overwhelming joy—I think we would rapidly begin to see “God arise and by His might, put all His enemies to flight” (Psalm 68:1).

Alexander Solzhenitsyn once said the disasters that befell man in the 20th century came about because “men had forgotten God.” Quite true, but in recent years something more seems to have happened. We have forgotten Man—by which I mean that we have forgotten what it actually means to be human. We have forgotten where human dignity comes from, forgotten why we are here, forgotten where we are going, and now we have even forgotten what it means to be male and female. One thing I am convinced of is this: Even in the midst of all the insanity of our day, when more and more people are accepting it, deep down there is a great angst and unease about the way things are going and whether we have lost our way. If there ever were a time to recover the objective meaning of humanity, and to talk about it with others, it is now.

Through clever and subtle manipulation, Hegelian Dialecticism has been used to dilute, distort, and ultimately eliminate the very idea of truth. Recovering the concept of objective truth is key to any response. However, the temptation we will often face is to react to the liberals’ agenda in a shrill and outraged way. But remember, this is exactly the reaction they are hoping for. They want us to get so angry that our eyes bulge and the foam forms around our mouths, as they can then play our reaction (thesis) against their Soft Power Emotionalism (antithesis), and so win the hearts and minds of the masses in the middle to compromise and embrace socially liberal changes (synthesis). Don’t misunderstand me. We should have a righteous anger about the huge cultural shifts that are taking place. They are destroying lives and that ought to arouse our indignation. But we must harness that righteous anger.

The key is found in Ephesians 4:14-15, where Paul contrasts being “tossed to and fro by the waves and carried about by every wind of doctrine, by human cunning, by craftiness in deceitful schemes” (which would include Hegelian Dialecticism), with “Speaking the truth in love.” This is crucial to the fight we are in. Speaking the truth in outrage, bitterness, or anger only sets up another thesis/antithesis, and we are bound to lose. Speaking the truth in love is intended to break the cycle of lies and deception. After the central message of the incarnation, death, resurrection, and ascension of Jesus, this could well be the most potent weapon we have to break the downward spiral of deception foisted upon us by Hegelian Dialecticism.