Patrick and the power of the Gospel

For some, St. Patrick’s Day is merely an excuse for parades, parties, and green beer. Others are only vaguely aware that the day passes.

In any case, it’s a shame to miss out on a great story demonstrating the power of the Gospel.

Patrick lived in Great Britain during the fifth century when the Roman Empire was declining and Christianity was spreading. Pagan raiders from Ireland kidnapped and enslaved him. He was exposed to Druid ritual sacrifices and thrown into a dungeon when he was only 16 years old. This crisis caused him to recall his Christian upbringing, cry out to God, and be converted to Christ. Years later he escaped back to his family in Britain, but eventually God called him to return to Ireland to be a missionary to the very people who had enslaved him.

Patrick established churches, schools, and orphanages throughout Ireland, and even saw some of the nobility converted to Christ in his lifetime. That’s not all. A popular book titled How the Irish Saved Civilization has this to say about him:

Not only did he bring Christianity to Ireland, he instilled a sense of literacy and learning that would create the conditions that allowed Ireland to become “the isle of saints and scholars”—and thus preserve Western culture while Europe was being overrun by barbarians.

There are so many lessons we can learn from Patrick’s life:

Suffering brought Patrick to a crisis of faith, forcing him to decide what he really believed.

His parents feared for his faith but took comfort in the fact that they had prayed for him and taught him the Gospel.

The Gospel compelled him to love his enemies. It drove him to pray and prepare to go back to Ireland, risking his life.

The Word of God was treasured in a time when most people were unable to have a copy for themselves.

God sovereignly orchestrated the details of Patrick’s life. The story goes that Patrick’s experience working with wolfhounds as a slave shepherd would later provide him a way of escape and a way to present the Gospel.

Another story says Patrick intentionally got a king’s attention by breaking the protocol of a pagan festival. He lit a bonfire before the king lit one. Patrick could have been put to death, but instead got an audience with the king, who was converted.

Patrick’s faithfulness affected an entire country and left a legacy known the world over.

Of course, there are also some unhelpful embellishments and legends that have grown up around Patrick’s life, so we need to be discerning about what we read.

Did Patrick use three-leafed clovers to teach the Trinity? We don’t know, but its not a bad idea to use something common in culture as a springboard to present the truth. And we might as well take advantage of the opportunity to do the same with the day associated with Patrick.

One helpful resource that your whole family can enjoy is The Power of the Gospel, a 10-minute video by Christian historian Marshall Foster available at worldhistoryinstitute.com/media. It sets Patrick’s story in the sweep of redemptive history, and l think you’ll be encouraged and inspired by it. 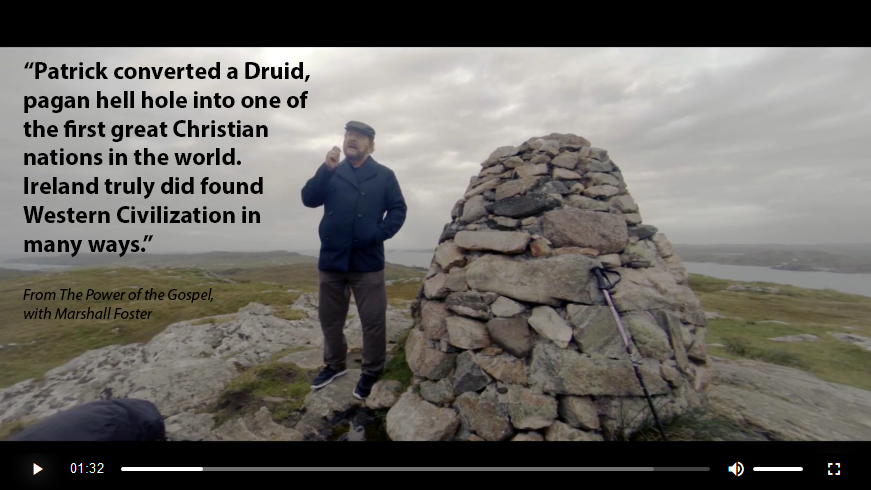