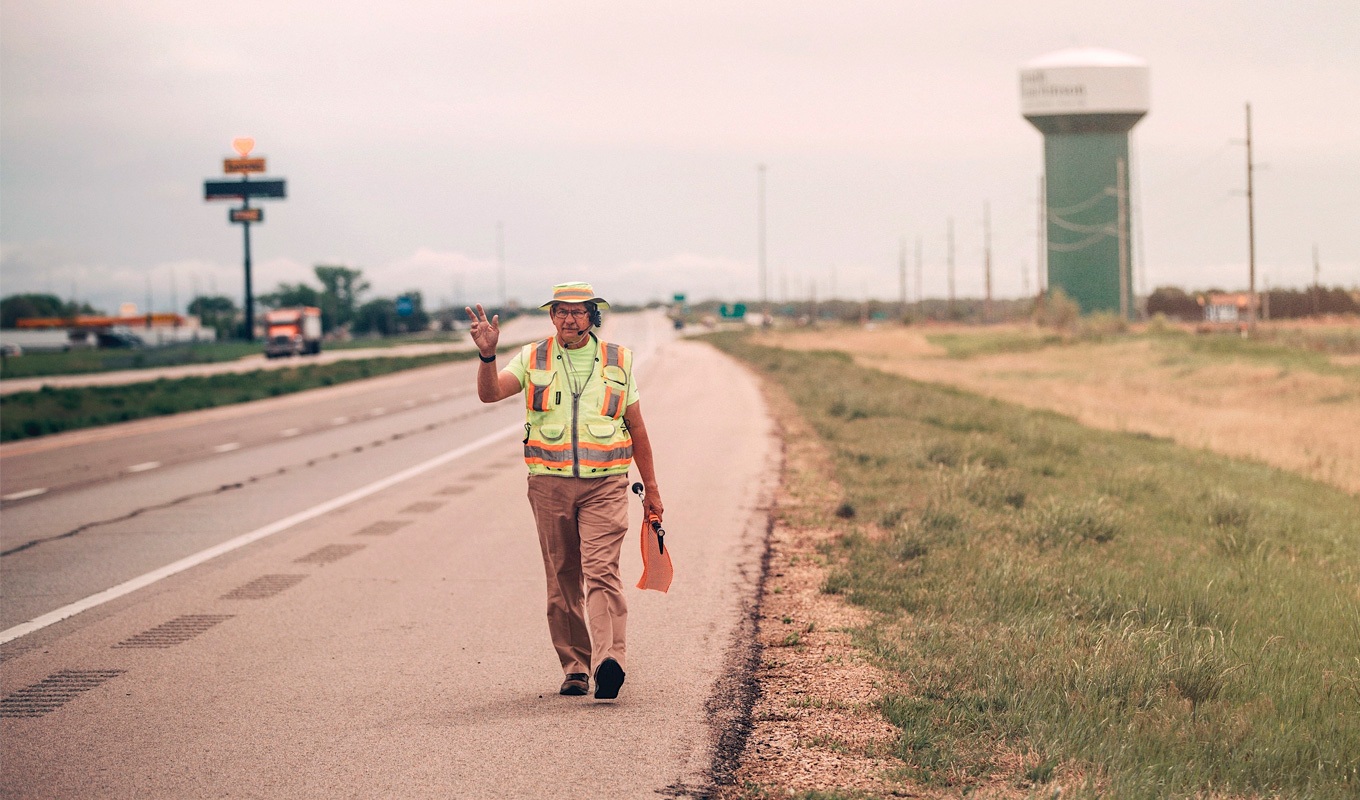 Member walks across the country to raise awareness of foster care

Glenn Koster wanted to raise awareness of the need for homes for thousands of children in the foster-care system across the United States, so he walked 4,310 miles.

That’s about 9 million steps through 16 states and six mountain ranges.

The 64-year-old Samaritan member walked from Miami, Florida, on the East Coast across the U.S. to Westport, Washington, on the West Coast. The effort took place over 201 days achieved over two years, 2018 and 2019, with the break due to some mechanical issues with the Kosters’ recreational vehicle and some health issues. He began walking on February 1, 2018, started the break in July 2018, and stepped out again in May 2019, finishing this past August 28 in the surf of the Pacific Ocean.

“I didn’t do it on my own,” he says. “I did it knowing that it was God who enabled it to happen.”

In the foster system

Glenn himself was in the foster system twice growing up. Abandoned at age 6, he was adopted, but had to be removed from that home 13 months later due to neglect and abuse. After re-entering the foster system, he lost his next foster father to a heart attack but landed with a good family and was adopted again by age 10, this time for good.

But he encountered trouble as an adult himself.

“I mimicked the behavior of my birth father,” he says. “I became an alcoholic and a spousal abuser.”

Glenn has been sober and violence free since 1989, he says. “Because of the drinking and violence, though, I could never be a foster or adoptive parent,” Glenn says.

So, he did the next best thing: walking across the United States to make the need known.

By his own estimations, he has managed to meet his goal. Thanks to the walk, he believes that he has been able to get the word out to about 1 million people due to combined exposure through “uncountable” one-on-one conversations, about 50 newspapers, several TV stations, National Public Radio, and K-LOVE Radio, denominational newsletters, speaking at more than 40 churches, presenting at three different foster-parenting seminars, and social media.

Conversations along the way helped Glenn to spread the word organically about the need for families to open their homes to foster children. One man stopped his truck in the middle of a country road to talk with Glenn about why he was walking.

“If every church had one family step to the plate as a foster family, there would be no shortage of homes,” he says. “If every church rallied around those families, respite and emergency care would not be an issue either.”

The most recent numbers available show about 443,000 children were in foster care in 2017, according to Child Welfare Information Gateway. But Glenn says that still leaves tens of thousands more waiting for a home to open up, either temporarily or permanently.

“Many foster parents that I have talked to mention the frustration they have with the system, particularly in addressing issues that arise in a timely manner because of the caseload of available social workers,” Glenn says. “Another issue for foster care is a lack of ‘respite parents,’ folks who step up for a day or a weekend to allow foster families to have a break.

“Emergency needs also exist in most states to address those situations where a child must be removed immediately for safety reasons. In Kansas (where Glenn lives), such removals can result in a child spending a night, or two, in a social worker’s office.”

Glenn had started the healthy hobby that led to an erstwhile cause with a job-related fitness challenge, then met a man walking from the Grand Canyon to Cincinnati to raise awareness of the Creation Museum.

“A light went off,” he says. “I realized I could do a cross-country walk to raise awareness of the need for foster care and adoption.”

He ramped up his endurance with a walk from Oklahoma to Nebraska in 2014, going 187 miles in 10 days. In 2015, he walked from Eve, Missouri, to Holly, Colorado, in 22 days. Both of those walks were fraught with blisters, bleeding, and cramping, but through them he learned to do such things as wear two pairs of socks and wear the right size shoe. He found out during 2014 that, thanks to walking, his feet had spread out and elongated from size 10½D to 12½EE. Wearing the right size of shoes helped with his cramping. And taking a walking stick along helped his balance, especially when negotiating ditches and hillsides.

Glenn has done all of this despite health challenges like cataracts forming in both eyes and midlevel thrombosis in his left leg.

He and his wife, Charlcie, teamed up for the cross-country walk, with Charlcie managing the RV they used, tending to Glenn’s feet in the evening, and making sure he stayed hydrated.

The Kosters’ first plan was for Glenn to walk from Seattle to Miami, but seasonal considerations led them to reverse the course. The original route would have taken them through the Cascade Mountains and Rocky Mountains while there was still a significant chance of major snowfall and then land them in the Southeast during hurricane season. They also decided to avoid major cities to give Charlcie a break, since she was an inexperienced RV driver.

The couple also saw a reason for the longer route.

”I wanted to be able to show that foster care and adoption is a nationwide problem,” Glenn says. “What better way to show that than to walk farther than the shortest east-to-west distance plus the shortest north-to-south distance. That combined total is 4,274 miles, so I knew I had to walk somewhere close to 4,300 miles. No matter how you slice it, the only way to accomplish that total was to stair-step a diagonal route across the U.S.

“Secondly, I wanted to emphasize the fact that foster children do not have an easy life, so my route had to be somewhat difficult. Hence, I chose the most difficult route, a route that would take me through six mountain ranges: the Ouchita and Ozark mountains in Arkansas, the Black Hills in South Dakota, the Badlands in North Dakota, the Rockies, and the Cascades.”

None of that includes the training. He covered nearly 1,800 miles in late 2017 and 2,400 miles between his 2018 and 2019 walks. Often, he and Charlcie would walk a couple miles a day through towns they stayed in along the way to meet more people and tell them about their efforts.

The only days Glenn didn’t walk were Sundays, holidays, and unplanned downtime due to mechanical failures or injury.

Still, he had to work through challenges from snow to heat—the heat index hit 112 at one point in Nebraska—to steep inclines. “And sometimes a mix of more than one!” he says.

Some days he had to cover as many as 30 miles “simply because there was no appropriate place to call it a day and know we would be safe overnight.”

He and Charlcie tried to connect every six or seven miles, but sometimes the distances had to stretch to 10 or 11 miles. Glenn was mainly concerned that Charlcie find a safe place to park the RV to wait for him.

By the time the Kosters stepped into the Pacific Ocean, a small welcoming party had gathered due to the word getting out on K-LOVE stations.

“It was exhilarating,” Glenn says. “I was truly glad that it was over. Yet, at the same time, part of me says, ‘What’s next?’”

What’s immediately next is Glenn’s new position as associate pastor for urban ministries and evangelism at First Church of God (Anderson) in South Hutchinson, Kansas.

And while Glenn and Charlcie are still living in their RV with their adopted dog, Walker, Glenn’s long-distance walks are now limited.

Charlcie and Glenn Koster rest in their RV. (Photo by Adam Hanly)