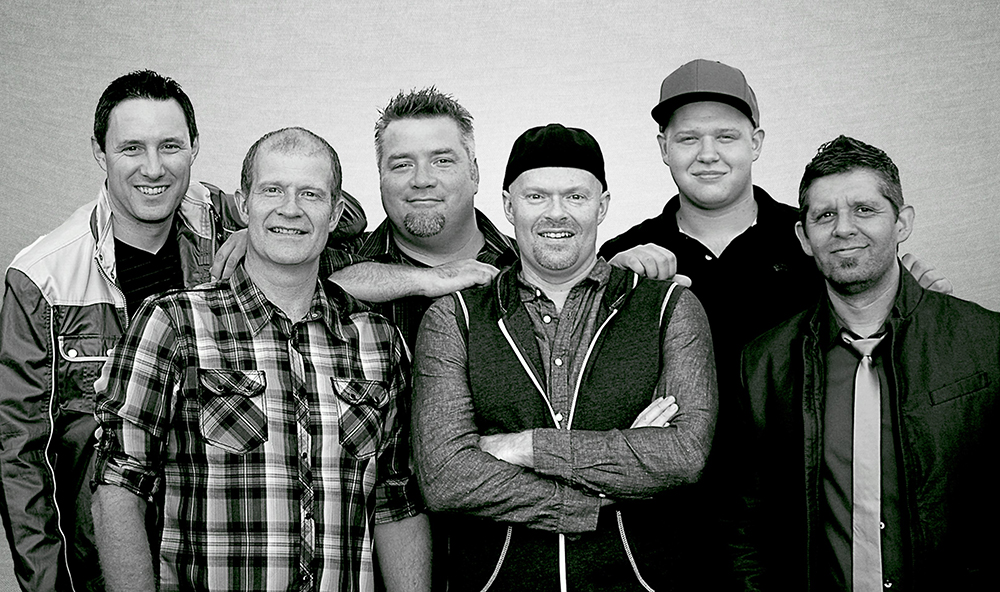 This Hope, a vocal group that started in the early 1990s in the small town of Soldotna, Alaska, and is now based outside of Atlanta, Georgia, seeks to “direct people to Jesus Christ and to present the Gospel through song and through the Word,” says group member Mikah Boudreaux.

In the ’90s, that mission was carried out mainly around south-central Alaska near Anchorage, with occasional forays several hours north to Fairbanks. The group—Mikah, David Inabnit, Tim Inabnit, Daniel Johnston, and Jeane Bope—grew up together in Soldotna, attending church and school together. They performed in different combinations during high school and college before melding into This Hope. The quintet started traveling as they also started careers and families, until it became apparent they were being called to something larger.

“The Lord continued to open doors for us,” Mikah says.

They prayed about going into full-time ministry and leaving Alaska, and after a year felt that the Lord was leading them to do just that. The men and their families chose Atlanta, heading there in 1997. It’s a good location, Mikah says, because, besides having a solid church base, Atlanta is only a few hours away from Nashville for recording, and the South and East coasts are within reasonable driving reach as well.

“It was quite a shock moving to Atlanta, because we were probably just young and didn’t know any better,” Mikah says. “It was a huge leap of faith for us to uproot our families and move to Atlanta. There were moments along the way that He definitely tested our faith and there were days when we were wondering if this was really a wise choice. But through all those early years, God continued to confirm what we were doing through how He was working in our concert ministry and how He was continuing to provide for us.”

This Hope communicates its message through a combination of a cappella and instrument-backed performance as well as spoken testimonies.

Besides performances at churches, conventions, and conferences, This Hope has produced 13 albums. Most feature original music and covers of Christian songs, but they also have a couple Christmas CDs and one album of only hymns.

“It’s been neat to see how the Lord has brought song ideas to us and how they’ve encouraged and blessed people along the way,” Mikah says.

“One of our most recent albums included a lot of well-known worship songs,” he says. “It’s great to have that aspect of leading corporate worship and having songs everyone’s familiar with.”

While a cappella music is pretty basic—vocals without instrumentation, such as popularized by groups like Take 6, Glad, and Pentatonix—their performance of it has developed over the years. Each of the men sings, but they have different strengths.

“We try to use all of us together to accentuate individual strengths musically,” Mikah says.

“In Alaska, we did a cappella the old-school way—just gather five guys around a microphone and hit ‘record’ and see what comes out the other side,” Mikah says. “Through the years technology has increased and changed to make it so that it’s a lot more complex, a lot more technical now. But we’ve always kept that vocal harmony as a centerpiece of what we’re doing musically, which I think a lot of people relate to. With five singers, we can create some interesting harmonies.”

Relating to people comes easy for This Hope. The guys still look like the people they’re trying to reach, probably a result of their Alaskan days of trying to keep warm and comfortable, Mikah says. During those Alaskan days, they worked jobs like their audiences did. Running construction equipment, civil engineering, managing fast-food restaurants. On the weekends they’d squeeze in some recording or rehearsing before going to churches on Sundays.

Travel was a group and family affair as well, and still is as much as it can be. The group drives a bus with 12 bunk beds in the middle of it. In the early days, that meant whole families go could on trips. With an increasing number of children, however, that has changed. “Now there’s 26 of us,” Mikah says. “We don’t all fit on the bus anymore.”

But Mikah’s 6-year-old, Heidi, “took her first trip with Daddy all by herself on the bus” last month.

“That’s been an important part of what we’re doing so the families can feel like they’re involved and so they see the impact of the ministry,” Mikah says.

“They’ve been so supportive of our ministry through the years,” Mikah says. “As much as we would want our families to come with us all the time, the reality is a lot of times they’re at home on a Sunday when we’re out traveling. So to have a great home church that is there to minister to our families is so important.”

This Hope’s members stay connected with their church base, too, serving in the Awana ministry “so when we’re not away from home we’re serving there ministering to our kids and all the kids of the church,” Mikah says.

Dave’s children have been involved in the church’s music ministry and Tim’s daughter is active in drama there.

There are other family ties as well within the group: Dave and Tim Inabnit are brothers, the sons of Ted Inabnit, who pastored the Soldotna church that birthed This Hope; Dave married Daniel’s sister, Carrie; and Daniel married Jeane’s sister, Shelby.

Each of the singers carries responsibilities within the group: Mikah coordinates their schedule and communicates with churches, as well as handles administrative duties. Jeane works on the group’s website design and social media presence. Tim does a lot of the sound engineering and mixing in the studio.  Daniel is the main vocal arranger and helps with scheduling. Dave works on social media, nonprofit administrative duties, and insurance concerns. They each contribute to the songwriting process as well.

“There’s all kinds of behind-the-scenes work,” Mikah says. “It’s pretty amazing the amount of man hours compared to the amount of time we’re actually ministering. It’s probably at least 10 hours of labor to every hour that we’re ministering.”

Traveling and rehearsing takes up much of This Hope’s time. A week in July saw the group ministering at two different churches in North Carolina on a Sunday, spending Monday at home catching up on a few things, back on the road Tuesday to minister at a LifeWay Worship Week in North Carolina, then on to New Hampshire, Vermont, Pennsylvania, and Virginia. The following week they were to be back in the studio working on Christmas music, have a couple days off and then head back to the churches on Sunday.

“Our schedule is kind of crazy,” Mikah says. “We could be out one day a week, or we could be out for a full week. So it’s always fluid.”

This Hope’s members have committed to try spending two days a week with their families, though.

“Because we’re kind of our own business, per se, we have the flexibility to go and do things during the day,” Mikah says. “If someone has a school program or a sporting event, we try to make allowances for that around our work schedule. That’s really a blessing because there are times when we’re gone and we miss things, so we try to make it a priority to be available and to be able to encourage and to love on our families whenever we’re at home.”