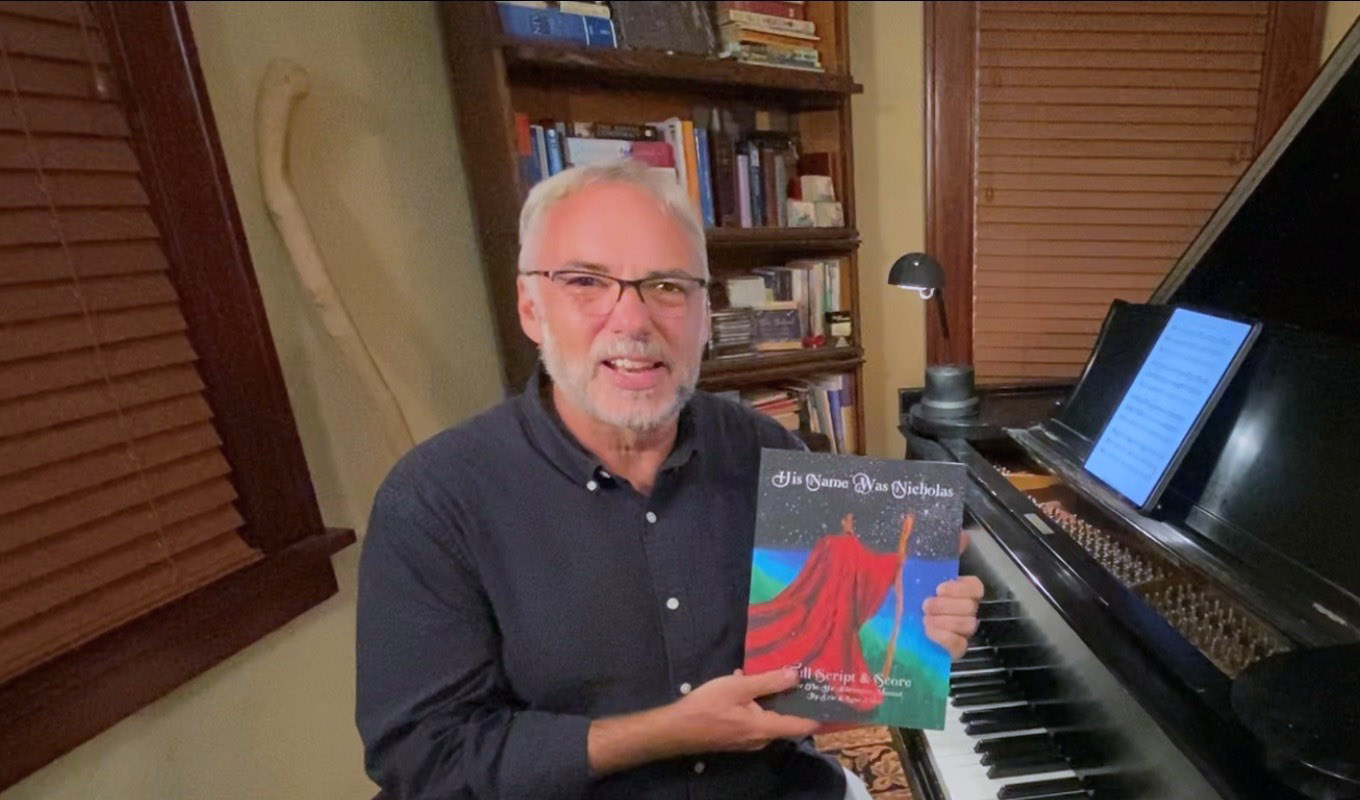 Eric Elder, the author of over 25 books as well as a pianist, speaker, and ordained pastor, is bringing the real-life story of St. Nicholas, the precursor of the modern-day Santa Claus, to the screen.

First, their book St. Nicholas: The Believer—A New Story for Christmas Based on the Old Story of St. Nicholas was published in 2013. Five years later, a Christian dance company asked Eric’s permission to turn the book into a ballet production. It turned out so well that Eric began planning to film the production, and One Life: The Movie was born. The hour-and-15-minute movie was released privately in November and will be available for public viewing through OneLifeBallet.com starting December 18. Finally, Eric recently published the musical His Name Was Nicholas, which is based on the life of St. Nicholas and includes the full script and score.

Eric also runs TheRanch.org, an online spiritual retreat center that he launched in the mid-1990s. The website offers daily devotionals, soothing music, Scripture readings, and a quiet place to pray. In addition, Eric is a tech expert, having worked for a Fortune 10 company for nine years before God called him into full-time ministry.

The Elders wanted to establish Christmas traditions that point to Jesus.

Twenty-five years ago, Eric and Lana were debating which Christmas traditions their young family should have. “We both be-came Christians just before we got engaged and married, and we were trying to decide whether we were going to include the Santa aspect and the gift-giving in it,” Eric says. “We were pretty torn because we didn’t want it to be materialistic, and we didn’t want it to be secular, because we so much wanted to focus on Christ.”

Lana knew the story of the real St. Nicholas, who lived in the fourth century A.D., and, in the end, Eric says they chose to focus on the elements that were a celebration of Jesus, the greatest person ever born. “We did decide to go with the gift-giving and talking about St. Nicholas, why we give gifts, why he was important in the story, and his love for Jesus,” Eric says.

“St. Nicholas loved Jesus with all his heart and soul and mind and strength. And, when people know that, it changes their view of incorporating his story into the Christmas story,” Eric says. “You don’t have to choose between Santa or Jesus.”

Lana wanted to share St. Nicholas’ story with other families to help them “recapture the true spirit of Christmas and to focus on Jesus, as well as the celebration of it all,” Eric says.

Eric and Lana started researching St. Nicholas in depth, including traveling to the Holy Land to where St. Nicholas lived not far from Bethlehem. Eric also traveled to Turkey to St. Nicholas’ birthplace and to London to speak with a preeminent scholar on St. Nicholas.

Their initial desire was to make a movie to share the story, Eric says, but eventually he and Lana took their research and began writing a book as the “first step toward a movie to flesh out the story and make it compelling, made out of these individual stories that we do know about Nicholas.”

In 2012, Lana finished her final edits on the book two weeks before she passed away after a nine-month battle with cancer.

A year later, Eric published the book on Amazon and shared it with his online subscribers in a six-week series.

In 2018, while Eric was working on turning the book into a musical that could be filmed, he was contacted by the South Carolina Christian Dance Theater. The director, Cynthia Dewar, had come across St. Nicholas: The Believer while searching online for “a new Christmas story,” and she, along with the assistant director, Erin-Elizabeth Morton, wanted to adapt the book to stage a performance with over 200 dancers.

Eric joyfully granted his permission, and the adaptation, entitled One Life, has been performed two years in a row. He is ex-cited for it to become a new annual tradition. “People love to go see The Nutcracker ballet at Christmas every year, and we thought One Life would be a good alternative to The Nutcracker or in addition to it, as The Nutcracker doesn’t really point people to Jesus,” Eric says.

“Already people are reading the St. Nicholas story every year with their kids, which is really exciting to hear,” Eric says. “It’s becoming a tradition already just in book form.”

But Eric wanted to take things one step further.

When he saw the finished ballet production and how the directors had done such an excellent job pointing people to Jesus while utilizing beautiful choreography and imagery, he knew he had to film it and share the hope it portrays with a much larger audience. He says the dance company did all the “heavy lifting” with the choreography, lights, costumes, and set, but he was happy to further contribute by composing and orchestrating two songs that are featured in the production as well as in the musical he later completed.

Eric hopes One Life: A Christmas Story Ballet will become another new annual tradition for families.

… and now a musical available for churches and theaters to stage.

Eric published His Name Was Nicholas: Full Script & Score for the Hit Christmas Musical in June of this year. It’s his latest step to-ward the dream he and Lana shared of making a movie about St. Nicholas’s story, as he hopes to film the production of the musical in the coming years.

“I’m in contact with some people on Broadway and in Hollywood and others, but I would love to have it produced locally at any level by any age group or talent group,” Eric says. “I think it’s something that communities all over the world would like to do and use to point people to Jesus.”

The musical will be more accessible for people and communities than replicating and staging the ballet because it’s a more “traditional Broadway style” in which people of all ages can dance, sing, and act, he adds. “And I think it’s an interesting hook to draw people into the Christmas story by using the real-life story of St. Nicholas, and then his love for Jesus just shines through,” he says.

Eric is currently working on completing the accompanying album to His Name Was Nicholas, which will be fully orchestrated to be used to perform the musical or enjoy on its own.

Here’s how you can pray for Eric Elder Ministries:

Does your church or community theater group need a Christian-themed production? Visit HisNameWasNicholas.com or Amazon to purchase the full script and score for Eric Elder’s Christmas musical His Name Was Nicholas.

Brittany Klaus is a Member Communications Specialist for Samaritan Ministries.