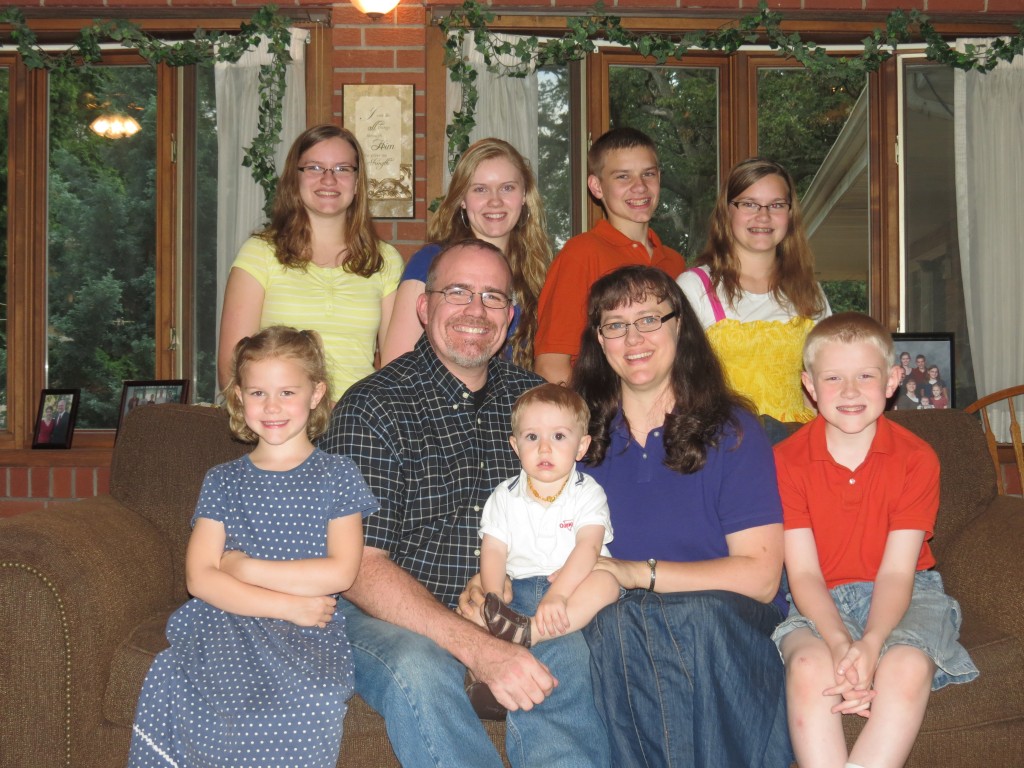 God has blessed Daniel Ryken in a lot of ways.

He has given the Samaritan Ministries Board member a “knack for numbers,” which has led the Pekin, Illinois, resident to a career as a computer security specialist.

The Lord also spared Daniel from severe injury, possibly even death, when he fell off some stairs at a base in Saudi Arabia during the first Persian Gulf War and narrowly missed impalement on a tent stake, instead only clipping his ear.

And He has given Daniel his supportive wife of 22 years, Sheri, who “completes me.” The mother of their eight children is “extremely organized, which is a great benefit to her husband, who’s not organized,” Daniel says.

He is appreciative of those and other blessings, and tries to give back to the Lord from what he has been given.

“I just have a knack for numbers and working with numbers,” Daniel says. “For years, I thought that would mean I’d be an accountant just because I like to work with numbers. As the Lord guided me through open doors or showed me doors that were closed, it became clear that while I’m definitely good with numbers, it would be more from a computer communications perspective than an accounting perspective.

Part of the way he’s doing that now is by serving on the Samaritan Board. Daniel says he has long wanted “to take the knowledge that the Lord has granted to me from a computer security perspective and computers in general and be able to use it to help the Body of Christ.”

He gained some of that experience by serving in the Army for 8½ years in the 1990s, securing and fixing communications equipment, including 180 days on the Saudi Arabia-Iraq border during Gulf War I. It was during that time he nearly fell headfirst on a tent stake.

“In the desert, if there’s no moon, you can’t see your hand in front of your face,” Daniel says. “One time when the moon wasn’t out, I was up on a platform and had to take some stairs down, and I couldn’t see the stairs.”

When he stepped down, he stepped not on a stair but on a side rung, fell, and clipped the side of his ear on the tent stake that was sticking about a foot out of the ground.

“If I’d fallen an inch further to the right, I’d probably be dead,” he says. “It’s one of those experiences where I knew the Lord was watching over me, and He’s got a reason for me to still be alive.”

That reason these days might be to help corporations secure their data systems. He tries to help a variety of businesses “secure computers or communications for computers.”

The biggest challenge in his field? “The bad guys are always a step ahead,” he says. “Mitigating the risk” is what he helps corporations with, “minimizing the risk to the organization so that when it happens it doesn’t destroy you.”

That challenge can come from either outside of or within a company.

“You find some people working for an organization are out to get money, so if they can get rich stealing something, they will,” Daniel says. “Then you’ve got the Anonymous groups of the world that are out there just trying to hack and steal as much money as they can.”

But sometimes the good guys cause problems, too, he says. “We find very good people who are not doing things in a very secure way,” Daniel says. “They’re just trying to get their jobs done, and they don’t realize there are security risks involved in the way they’re doing it.”

Like life in the military, life in the corporate world is a challenge in itself for a follower of Jesus. Daniel says that “it’s not a blue-collar job where everybody’s cussing all the time, but there’s a lot of greed and me-first attitudes, living of lives based on ‘how much money I can get and how I’m going to get paid for this.’”

The military is “a rough world,” Daniel says, “especially in the enlisted ranks.”

“There’s a lot of room for work for a Christian,” he says. “It’s a very difficult place for a Christian to live, especially if you’re single, because you’re surrounded by the world 24 hours a day. You can’t get away from it. It’s a great place to be a light shining in the darkness, as long as the darkness doesn’t have a greater effect on you than you do on the darkness.”

On the other hand, Daniel says, those people living in the dark “need to hear the message, and they need to see what a Christian life looks like.”

“Whether it’s covertly or overtly, they recognize differences when there’s a Christian living out their faith,” he says. “You don’t have to be preaching at them to see it, and I’m living proof of that. They could see that I was different and knew that I was different. And a few would actually approach me and talk to me about it.”

He was there for a reason.