As the Maxwell family has followed God into different ministries, the journey has not always been smooth. When their son, Luke, nearly died in a car crash during a depressive episode, the Lord brought the Maxwell family together to support him. They banded together through Luke’s recovery and in the development of his teen suicide prevention ministry, ucantberased.com.

When Luke Maxwell was 12, he began to feel “lonely, sad and tired all the time,” and he did not know why.

“I kept secrets about how I felt,” says Luke, “pretending to be happy and satisfied in life.” When it came to God, Luke says, “I lost my faith. I couldn’t believe God or anyone loved me.”

Yet what could have ended in tragedy became an occasion for God to show mercy and redeem.

The driver of the other vehicle was Lenny Ross, a husband and father, and also a Christian. Though Luke collided with Lenny going 60 mph in the family 12-seater, neither Luke nor Lenny suffered serious injuries. Lenny had a broken sternum and glass embedded in his body. Though Lenny was admitted into the hospital, there was no other internal damage. “I had a scratch on my arm,” says Luke. 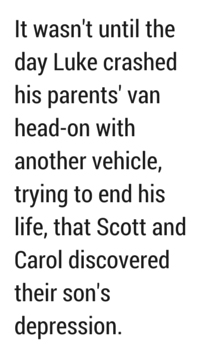 Doctors diagnosed Luke with major depressive disorder (MDD) and started him on medication, which he was weaned off almost two years later. He also saw a Christian therapist for counseling and a priest for spiritual direction. In addition, his diet was carefully monitored to avoid any foods that could affect his mood. God provided him the peace to slowly reflect and recover. He could finally begin to feel again that he was loved and had a future.

In the midst of his recovery, Luke also faced legal proceedings, since his crash was ruled an assault with a deadly weapon. The Maxwell family began praying for Lenny right after the crash. Luke felt moved to ask Lenny personally for forgiveness, though he was not able to speak with Lenny right away.

“Finally, my dad asked the (district attorney) if it was possible to contact Lenny,” says Luke. “She didn’t think so, but she said she’d ask him if he was interested. We were pleasantly surprised when he seemed just as eager to meet us.”

It turns out that after Lenny had heard Luke’s crash was a suicide attempt, he began to pray for Luke, asking God for an opportunity to reach out. When Luke and Lenny met, Lenny did forgive him personally, and they shared inspirational Bible verses. However, Luke’s criminal case continued, requiring probation, a large restitution to Lenny, and community service. Miraculously, the DA supported Luke in staying out of jail by placing her reputation on the line with the judge that Luke would not re-offend.

As Luke continued to recover, he looked for support groups in his area for teens suffering from depression. He quickly discovered that there were none, and that the stigma of mental illness kept other teenagers from admitting their struggles. He decided to begin ucantberased.com as a way to share his story. He also started a support group to save lives by showing teenagers they are not alone and encouraging them to get help.

They are passionate about upholding a “culture of life” in the midst of a “culture of death” and saving lives “for the glory of God.”

“We do what we do so lives are saved,” says Carol, “so that another teenager going through what Luke went through can get help. But this is not just about Luke, it’s about the glory of God.”