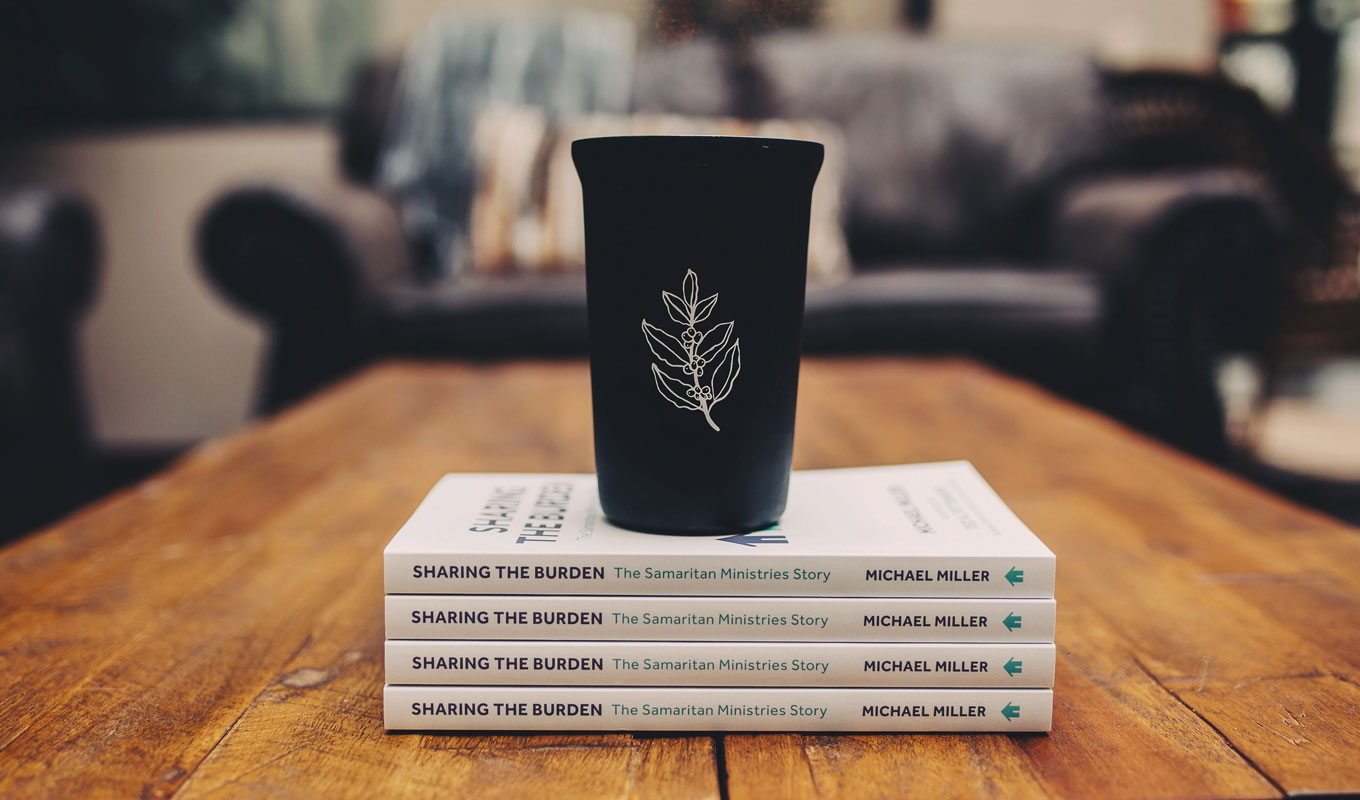 The following is an excerpt from Sharing the Burden: The Samaritan Ministries Story by Senior Communications Specialist Michael Miller. You can buy the book here.

Health care sharing is counterintuitive. After all, there are no guarantees. In its place comes trust . . . trust in God and the Body of Christ. Longtime members insist this is a better way of taking care of health care needs.

Illinois Samaritan Ministries member Robert Rutan said he and his wife, Kelly, joined despite the lack of a guarantee from SMI that their needs would be met. This trust proved reliable, with their needs met even in the face of steep medical expenses for cancer treatments. “We know the stability and the dependability of the members,” Kelly said.

And it’s a “more responsible way to manage our own health,” she added, referring to the freedom Samaritan grants her to visit whichever health care providers her family chooses. Still, participation in a health care sharing ministry includes responsibilities. Members must learn to negotiate lower charges for medical services, something people with health insurance rarely think about. But when you’re responsible for how much money other brothers and sisters in Christ will have to send, you become more aware of what you’re spending, whether it’s necessary, and whether the treatment is available elsewhere for a lower cost.

That freedom to choose and the encouragement to take responsibility for one’s choices impresses Grace-Marie Turner.

I think it’s absolutely a model for what the rest of the health care system needs to learn.

Turner is founder and president of The Galen Institute, a public policy research organization focused on health care. During a visit to Samaritan headquarters in 2010, she said the ministry is “a really wonderful example of giving people the option to make their own decisions about health care and to be responsible in their health spending, as well as their consumption of health care overall.”

“It’s a community of people who know they are sharing the costs together, and those costs are visible to them,” she said. “I think it’s absolutely a model for what the rest of the health care system needs to learn: a community of people who exercise individual responsibility in taking care of themselves and their family and also who recognize that any excess spending on their part increases health care costs for the whole community. We don’t have that in the rest of the health care sector.”

“It’s a better way to do things,” he said. “There’s the community element [and] personal responsibility.”

Jason said he took “great pleasure” in walking into a hospital after the birth of one of his daughters and paying a $7,000 bill with the cash he received from other members. He had two goals in mind, starting with wanting to see the dollars the hospital charged (which he called unreasonable). Secondly, he wanted to show this provider that insurance isn’t an indispensable element of health care.

“We had help, but there’s still that sense of, ‘I was responsible for this even though you didn’t think I was going to be,’” Jason said. “There’s something liberating about that.”

As attorney Brian Heller points out, “It’s a witness to the world and a call to the true Christian believers, saying, ‘Hey, there is a way to live more Biblically and faithfully, whether it’s tithing or not going into debt—those kinds of Biblical principles that are hard for the average American to live out.’”

One of the challenges of issuing that call to Americans is explaining what Samaritan Ministries is rather than what it isn’t.

“We’ve found ourselves over the years explaining what we aren’t more than what we are,” Ray King said. “People ask, ‘What do you do?’ And we say, ‘Well, we’re not this and we don’t do this, and we don’t have premiums.’ People will ask, ‘Well, what do you cover?’ Well . . . we don’t cover anything.”

Our message has been that God is more dependable than anyone else. He’s where we should be putting our faith for our health care needs.

Samaritan is always learning how to convey what it does in a world that doesn’t understand “and can’t even relate to the approach we take,” Ray said. “When we explain why we’re not insurance and don’t ‘cover’ anything, it sounds even more undependable.”

When representing Samaritan at a trade show or conference and someone asks what SMI does, Ray responds that it’s a way “for Christians to help each other with health care needs without using health insurance.”

“Our message has been that God is more dependable than anyone else,” Ray said. “He’s where we should be putting our faith for our health care needs. When we try to be independent of God, we don’t get to experience His care.

The health care sharing concept is still hard for many Christians to assimilate. Although it has a relatively short lifespan in the annals of the nation’s history, health insurance still maintains a stranglehold on the minds of most Americans (including Christians). General Counsel Brian Heller said dependence on insurance is “so built into the American thought process that it takes a jolt to get people out of that, even if they’re intrigued by health care sharing.” Sometimes it takes an individual mandate forcing Americans to buy health insurance to make people question the norm. Whether gradual or sudden, it can take a price increase in the worker’s share of premiums to open some people’s eyes. Others experience an awakening after starting their business and facing sole responsibility for health care premiums. Sometimes a working mom whose job pays in health benefits will decide it’s better to stay at home with her growing children than remain in the workforce; when she quits her job, coverage ceases.

At first, however, health care sharing is often “so out of people’s realm of thinking that it doesn’t even register,” Ted Pittenger said. “I’m sure it’s like homeschooling was when it revived in the 1980s. People said, ‘You’re going to do what? Public education seems to be working okay.’ It’s just such a weird paradigm shift.”

Bob and Kelly Rutan were in the midst of such a shift when they joined Samaritan in 2002. Bob was on his way out of the public school system, where he had taught for several years.

“It wasn’t hard to understand how [health care sharing] works, once you have thoroughly examined it and understand how everything should work,” Bob said. “It takes a commitment to understand a new way of thinking. Once I did, it was easy for us.”

It wasn’t easy for extended family, though. His parents, and Kelly’s, expressed concern that such a ministry would fail to adequately meet their expenses. They finally stopped fretting when shares fully paid for one of Kelly’s childbirths.

“Our parents don’t know how it all works, but they know that it worked,” Bob said.

It takes a commitment to understand a new way of thinking. Once I did, it was easy for us.

Another family, David and Lisa Gordon of the state of Washington, joined Samaritan in January 2011 even while still wondering “if this really works.” Then, after sending shares to other members for 18 months, one of their daughters needed treatment for skin issues, and the Gordons had to submit their first need.

“The process was very simple,” Lisa said in a July 2012 letter. “We have been so blessed by seeing our financial need met by other members and [having] our daughter lifted up in prayer. And the answer to our question at the beginning of our membership is . . . ‘Yes!’ Samaritan works.”

Ted said he can’t be too hard on Christians who don’t accept the health care sharing way of handling medical expenses. He points to the marketing adage that people need seven exposures to a new idea before they embrace it. Samaritan leaders are also patient when it comes to the Body of Christ understanding the advantages of health care sharing, because they understand God works in His own good time. And they see their work as God’s work, since health care sharing—and the prayer and expressions of love that accompany it—are ways to further The Kingdom of God.

Ted, who, along with Ray King, closes his letters with “For The Kingdom,” says, “In a sense, we’re literally taking back the earth through the dominion mandate of taking ground for Jesus. We’re spreading His Kingdom here on earth. It says in Psalms that the earth will be His footstool. I see what we’re doing at Samaritan Ministries as furthering His Kingdom, furthering His dominion in the world.”