Cooking up a recipe for contentment 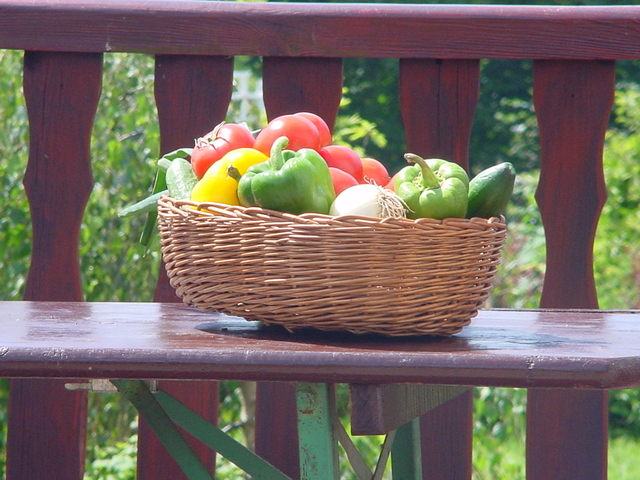 One of the most common complaints I hear from other parents is how they have been unable to get their children to eat certain types of food. As you will no doubt guess, I am not talking here about burgers, or candy, or other items packed with sugar or fat. Somehow the problem most of us seem to have with those sorts of foods is getting our children to understand the idea of moderation. But when it comes to green things that have come out of the ground, or things off a tree or bush that contain vitamin C, somehow many of us struggle.

I have watched more than one parent giving up. The battles took their toll and the child won. And so they have a whole list of things that they “can’t” give to their children: They won’t touch broccoli, they can’t eat parsnips. They won’t touch carrots, they can’t eat peas. They’ll eat potatoes, but only as long as they are roasted or fried. If they’re boiled or mashed, you can forget it.

I believe that this battle is a far more important one than we might be tempted to think. It is not simply a case of physical health, though that is important. Nor is it just a case of establishing parental authority, though that is crucial too. Even more important than that, the meal table in our formative years is very much a training ground for how we will end up coping with the things that providence will throw at us over the course of our life. Why is that so?

The Scriptural route to contentment is to cultivate thankfulness, and so in 1 Thessalonians 5:18, Paul says that we are to “give thanks in all circumstances; for this is the will of God in Christ Jesus for you.” Even more pertinent to this discussion, the Scriptural route to contentment around the table is to give thanks for the food that is set before us: “For everything created by God is good, and nothing is to be rejected if it is received with thanksgiving” (1 Timothy 4:4). Which would exclude fussing!

The key to getting our children to eat without fuss is therefore to instill thankfulness in them. However, this might well seem to be somewhat of a paradox. If they won’t eat, how can they be thankful? And if they’re not thankful, how then can they eat without fuss?

The Scriptures are often quite counter-intuitive on issues where we are exhorted to do something that we don’t really want to do. Take the end of Psalm 31, for instance, where we read this: “Be of good courage, and He shall strengthen your heart, all ye that hope in the LORD” (KJV). That sounds counter-intuitive because it seems to be the wrong way around. Surely if we’re lacking courage, we need God to strengthen our heart first. But no. It actually says that if we want our heart to be strengthened, we first need to be of good courage.

A similar pattern is found in the Sermon on the Mount, when Jesus says, “For where your treasure is, there your heart will be also.” Again, it sounds to us a little upside down. Surely our treasure follows our heart. Well maybe it does, but in this passage what Jesus is emphasizing is that where we put our money, our effort, and our resources, there our hearts will be.

In other words, if we want to be strong in heart, we are exhorted to be courageous. If we want to have more of a heart for, say, the overseas missionary work our church supports, the best thing we can do is to contribute more money to it, which will have the effect of engaging our hearts. The same principle is true of thankfulness. If we don’t feel like being particularly thankful, the Biblical antidote is to be thankful. And the more we strive to be thankful in the little things, the more we will find it easy to be thankful for all things. This is the secret of contentment.

Which brings us back to the fussy food issue. Children often have a natural disposition to fuss, whine, and complain about food. What happens if we indulge that? We are not only teaching them that they can have a list of foods they don’t have to eat, but far more importantly we are teaching them to be unthankful and discontented. Or to put that another way, we are teaching them that “everything created by God is NOT good, and MANY THINGS are to be rejected and NOT received with thanksgiving.” But if we strive to instill thankfulness in them, even for the things they say they don’t like, they will be far more likely to imbibe a spirit of thankfulness, which in turn will make them far more likely to eat what is put in front of them.

If we indulge their discontentment, do we suppose that this spirit will stop at food? Unlikely. I have no empirical evidence for this, no great studies that I can turn to make an explicit case for cause and effect, but it does seem to me that I live in a generation that is far less content and thankful than previous generations. It is a generation that fights for its perceived rights, and is often unable to accept when it doesn’t get those “rights,” or when it doesn’t get stuff now.

Where was this learned? I think a lot of it was learned around the meal table, and by that I don’t just mean whether or not a child actually gets to eat around the table with their parents—though that is of course a crucial factor. No, I’m talking about intact families, but families where everybody is eating something different, because the fussiness has been indulged and there is a long list of stuff that won’t be touched.

A few decades ago, this wouldn’t even have been an issue, since there was far less choice of food and most people could only dream of being able to afford the kind of stuff we have now. The family would eat the same food because that’s all there was. Today, we have so much more at our disposal and children are usually very much aware of that. How do we tackle it?

A mistake I have seen many make is to assume that when children say they don’t like this or they can’t eat that, that they really don’t like this or they really can’t eat that. More often than not, this is a trick and what they really mean, although they won’t express it this way is, “This isn’t on my list of 10 favorite foods, and so I’m not going to touch it.” I’ve listened to more than one parent who has fallen for that tactic, and who has sounded like an ambassador for their child and their fussiness by reeling off a long list of food their children apparently just cannot have. I’m sorry, I don’t believe it. If there were any truth in it, children decades ago who had no alternative choices given to them would have starved. But they didn’t.

None of that is to imply that this is easy. In my house it has, at times, been extremely difficult. In fact, it still is. However, I believe that the rewards for persevering and for insisting that your child eats the same food as the rest of the family are huge. The ordeal of seeing that two-year-old resist eating that green stuff can be extremely trying.

However, it is nothing compared to the joy of seeing them finally come to terms with the fact that they are going to have to eat it, but even more than that, then seeing them slowly coming to like it. In fact, this is the best way to train your child for a life of thankfulness and contentment that I can think of.