You and I have a destiny. We can explore what that is, through God’s Word and a relationship with Jesus, or allow that exploration to be blunted by the restrictiveness of politically correct thinking that refuses to admit to absolute truth. 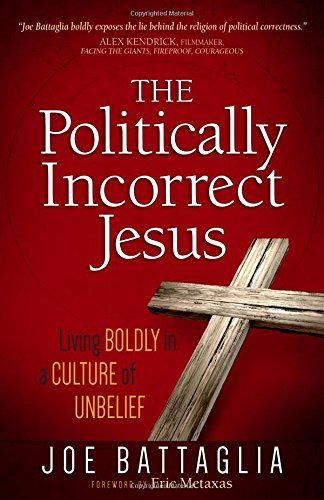 The culture we live in is on the path to self-destruction, following the man-centered ideals of political correctness. What do Christians need to do? The Politically Incorrect Jesus by Joe Battaglia tells how to respond Biblically. He says that Jesus instructs His followers to be “men and women of counterculture faith, making a difference in a counterfeit world.” How do we do that?

Because of who we are in Jesus Christ, we must uphold righteousness in a world that has a twisted view of good and evil. Jesus calls His people to reject the self-absorbed, unstable culture of political correctness and embrace the firm, unchanging foundation of God’s Word. “Once we embrace Jesus, we can begin to grasp what is true,” writes Battaglia. “Truth, then, comes through a relationship, and not through a religion, a political movement, or accumulated knowledge.”

A society that bases its understanding of truth on the conflicting beliefs of its members lacks a common moral compass, making it impossible to determine consistent standards of right and wrong.  As a result, people have begun to tolerate, and even celebrate, lifestyles that were once considered wicked and unethical. Champions of political correctness argue that, by accepting and even promoting sinful lifestyles, they are merely fostering diversity.

Battaglia says that a Biblical definition of diversity is “recognizing the uniqueness of creation (which includes mankind).” Those who advocate political correctness have perverted the intended meaning of the word, redefining it to justify behaviors that violate Biblical principles.

The Bible clearly teaches that Jesus Christ is the only source of truth. “[Jesus] wants us to go beyond the cultural rivalry fostered by political correctness and simply be lights to truth,” Battaglia explains. Verses like John 14:6, in which Jesus claims to be the only source of life and truth and the only way to the Father, cause society to accuse Christ of being exclusive and intolerant.

What society doesn’t admit is that Jesus is far more accepting than the most politically correct human being. While He does not approve of sin, Jesus demonstrates the ultimate level of tolerance by providing a way for even the worst sinners to be cleansed of their unrighteousness and made holy in His sight. Jesus is inclusive with the greatest gift of all—His Father’s love.

Ironically, those who advocate politically correct tolerance and inclusiveness are the same people who are attempting to remove all traces of Biblical standards from society and prevent Christians from living out their faith. When are the “tolerant” going to start practicing what they preach? “Leave it to us humans to get it all backward,” writes Battaglia.

The culture of political correctness encourages individuals to be the rulers of their own universe and to determine their own moral compass, explains Battaglia, but that way of thinking leads to a chaotic world that lacks purpose and rationalizes sin. Biblical Christians acknowledge that God is the Ruler of the universe, the Creator of truth, and the only reliable source of meaning for life.

Political correctness seeks gods that conform to man’s ideas, while Christians with a counterculture faith seek to conform themselves to God’s image. In his book, Battaglia asserts that those who accept God’s gift of forgiveness through Christ’s atoning sacrifice will begin to see the world through the Father’s eyes and start to perceive “God’s heavenly Kingdom as the focal point for understanding earthly existence.”

Instead of spending our lives chasing the ideals promoted by the culture of political correctness, which is progressively destroying our society, Battaglia encourages Christians to strive to live according to God’s principles. He suggests practical ways to live a Biblical, countercultural life: