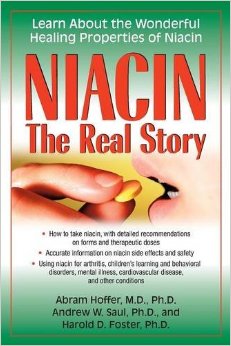 Niacin: The Real Story references nearly 300 scientific sources, along with many patient and doctor testimonies, to show that vitamin B3 (niacin) has been used to successfully treat arthritis, mental disorders, heart disease, and dozens of other serious medical conditions.

Abram Hoffer completed a Ph.D. in biochemistry in the 1940s, and during a stint at a food company, was involved in early efforts to put vitamins in the flour used to mass produce bread. He hoped to become a professor, but completed his medical degree in order to have a career that would better support his family. During his residency he decided to become a psychiatrist and went on to pioneer many innovative treatments with niacin, publishing his research until he passed away in 2009.

Harold Foster and Andrew Saul spent decades working alongside Hoffer and helped him publish his work, including this book designed to communicate the science in a way that is accessible to everyone. Generally, Hoffer contributes historical accounts of treating patients with niacin, Foster summarizes studies and publications, and Saul introduces and summarizes each topic.

Hoffer is considered a founding father of “orthomolecular medicine.” Orthomolecular means the “correct” or “right” molecule. In contrast, “toximolecular” is the term for a substance which acts as a poison in the body, which would include most pharmaceutical drugs and chemotherapy. The basic principle of orthomolecular medicine is that for every disease, there are corresponding nutrients—molecules that occur in nature—which can treat that disease. According to the authors, niacin is one example that has been shown to be effective both as a monotherapy and in conjunction with other nutrients to treat a wide variety of diseases.

Niacin comes in several forms: niacin, niacinamide, inositol hexaniacinate, sustained release, and extended release. The most benefits come from the basic form, but with higher doses a “flush” is produced. This flush occurs because niacin dilates blood vessels, and it can range from warm to hot. Saul makes it clear that the flush is not dangerous, and is actually helpful for determining optimum dose. The unpleasantness of the flush will sometimes motivate people to take alternate forms of niacin, which do not produce the flush. However, the book notes that although alternate forms do not cause a flush, they can be expensive and also do not offer the full range of benefits that plain niacin does.

Saul begins by explaining that niacin has been documented to be a necessary component in more than 500 biochemical reactions in our bodies. It has significant benefits in treating heart disease, because it raises high density lipoprotein (HDL) levels and promotes good vascular flow. Dr. Hoffer discusses how niacin can be used as part of a regimen to treat or significantly reduce mental disorders, including schizophrenia, bipolar disorder, or common behavior problems like hyperactivity in children.

The book criticizes establishment medicine for treating niacin as if its only use is to prevent its own deficiency when its usefulness in treating a wide variety of diseases is well-documented. Proponents of niacin even encountered blatant censorship when the taxpayer-funded MEDLINE database refused to index 43 years’ worth of the peer reviewed Journal of Orthomolecular Medicine. Thankfully the internet made the research available to all.

The book also discusses recommended daily allowances, or RDAs. RDAs are based on an average minimum amount needed to prevent a serious disease from developing, which for niacin is set at 16mg per day or 18mg per day for pregnant women. The authors argue that RDAs fail to consider that much larger doses are needed to maintain optimum health or to treat specific problems.

Dr. Hoffer and Saul say that the safety of supplementing with optimum doses of niacin is well established. There are no known cases of anyone dying from niacin. It likely would prove toxic at an extremely high dose of about 200 grams, but there are several symptoms a person would experience before reaching that dose. The flush indicates the body has stopped using the niacin, so it helps determine dose. If a person continued taking more niacin, they would experience nausea. If they kept taking even more in a short period of time, they would likely get very sick and expel the niacin.

Dr. Hoffer explains the connection between pellagra and schizophrenia. Pellagra is a niacin deficiency disease that manifests in severe skin sores and dementia. Three million Americans suffered from it during the 1930s and 1940s, and 100,000 died, but it was eradicated in two years when the government mandated fortifying flour and sugar with vitamins, especially niacin. However, Dr. Hoffer and Saul agree that this great success also resulted in a critical error made by the scientists in this era. The attitude of “vitamins as prevention only” was established, and they say it has impeded medical progress ever since.

Hoffer says that the major symptom of someone suffering from pellagra is a psychosis which is clinically indistinguishable from schizophrenia. In fact, he argues that schizophrenia is essentially a severe case of pellagra.

By adjusting the dose up to the flush point, Dr. Hoffer found that that his patients with pellagra needed up to one gram of niacin daily—50 times the RDA—and they usually recovered in a few weeks.  If they were unresponsive to a gram, Hoffer gradually adjusted their doses even higher. He found that schizophrenics needed 3 to 9 grams daily, and it usually took months or years in order for all their symptoms to be resolved.

There is an excerpt included from Dr. Hoffer telling the experience of a teenager who had schizophrenia and could not find a physician that would monitor her. She researched many books and websites searching for a treatment that could help her. She found out about niacin and began a supplementation program.

She eventually worked her way up to 60 grams a day—more than 3,000 times the RDA. When she hit that dose, the voices she’d been hearing stopped. Three years later, she still takes 3 grams of niacin daily as a maintenance dose, determined by the flush. Dr. Hoffer says that while this story is a dramatic example of niacin’s safety and treatment potential, he does warn against self-dosing up to such a high amount, and that a treatment plan should be worked out with your doctor.

The authors contend that perfectly healthy adults need several hundred milligrams of niacin per day, and most adults probably need 1600 to 1800 mg per day, which is about 100 times the RDA. Dosage should go up from there for anybody dealing with health challenges.

Arthritis is another disease that shows a clinical response to niacin supplementation. Saul tells the story of Dr. William Kaufman, a doctor who successfully treated thousands of arthritic patients with niacin about the same time Hoffer was making breakthroughs with schizophrenia. Those suffering with arthritis tend to find the flush aggravates their joint pain, so Dr. Kaufman prescribed niacinamide. He recommended doses up to 4 grams a day for severely crippled patients, and writes that doses of 250 mg spread throughout the day are much more effective than single doses of 500 mg or more. Dr. Kaufman says that on average he saw positive changes in his patients after one to three months, but that it can take longer depending on how advanced the arthritis is.

Dr. Kaufman wrote a book entitled The Common Form of Joint Dysfunction, in which he discusses his years of experience working with niacinamide to treat arthritis. Saul describes Kaufman’s book as an invaluable resource for anyone wanting to treat their arthritis nutritionally, and Hoffer and Foster echo his sentiments. They contrast niacinamide with Vioxx, a pharmaceutical drug used to treat arthritis. Vioxx was voluntarily taken off the market by its producer, Merck and Co., after it was associated with approximately 70,000 deaths, mainly cardiovascular related. Hoffer and Foster say that niacinamide is cheaper, more effective, and hasn’t killed anyone who used it.

Niacin’s versatility as a nutritional therapy was well demonstrated by Dr. Ruth Flinn Harrell, who worked with young children suffering from learning disabilities. She and her team used nutrients in large doses to help improve the functioning of children with brain damage or dysfunction. Dr. Harrell recalls the case of a 7-year-old boy who had never spoken a word and still had to wear diapers. After 40 days of her hypernutrition program, the boy’s IQ improved from the 25-30 range to about 90. He could talk, ride a bike, play with classmates, and otherwise function in a normal manner. Dr. Harrell reported remarkable success with her treatment program and was able to help children with Down syndrome and those who had suffered damage from brain surgery for cancer or other medical conditions.

The book also discusses the antiaging properties of niacin because of its ability to inhibit toxic reactions on a cellular level that would occur if there wasn’t enough niacin in the cell.