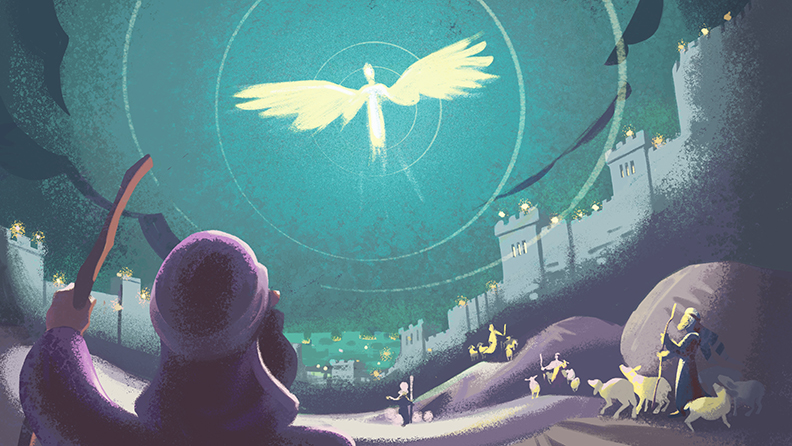 A Christmas message to the lonely and left-out

Luke 2:8 is an important passage of Scripture that mentions a group of shepherds who were dutifully caring for their flock. As shepherds, their life was simple, ordinary, mundane. They were tending their sheep at night, which meant that it was likely a warmer month since the sheep would bed down at night in the cooler months.

Picture the scene: the beautiful Judean countryside, countless stars, a warm stillness over the land, and the lights of Jerusalem within view. What a beautiful city at night! What a magnificent, awe-inspiring Temple they could see from the field!

In one sense, life was good. They had a simple life among God’s chosen people. But I imagine life felt somewhat bittersweet, too.

Their proximity to Jerusalem meant that they may have been tending the Temple flocks raised for sacrifice. This is where it gets complicated.

Their work with sheep meant that they were outsiders to the religious system. They couldn’t participate in the worship services to which their work most likely contributed because they were perpetually ceremonially unclean due to the circumstances of that work. How would it have felt to be one of those who made the worship of God possible and yet was excluded from participating in that worship?

In the first-century Jewish mindset, there were concentric circles of holiness and distinct levels of God’s presence and activity—from the earth to Israel to Jerusalem to the Temple Mount to the court of the gentiles to the inner court to the Holy of Holies. You would want to get as close to that physical place as possible. The closer you got to the Holy of Holies, the closer you got to God’s presence. That’s where He was at work. That’s where the good stuff was happening.

So, that beautiful city at night, that magnificent Temple, were  constant reminders that the shepherds were missing out on what God was doing.

Don’t we all have a shepherd part of our lives? A place where we feel very ... ordinary? Mundane? Lonely? Left out?

We, too, see our “lights of Jerusalem.” Maybe they’re on Facebook or Instagram. At our workplace. At church. That’s where “it’s” happening. Worse? That’s where it all looks like God is at work ... and we’re not there. So does that mean God isn’t at work here? It can feel like it.

The shepherds' faithfulness meant they were missing out. Don't we all have a shepherd part of our lives?

Even more crushing: What about when our faithfulness to God in the life situation He has placed us means we’re excluded from stuff we really want to be a part of, even in our service to God? The shepherds’ work to supply sheep for the Temple services meant they couldn’t participate in those services. Their faithfulness meant they were missing out.

What about you when your faithfulness in daily pouring out your energy at work, with your spouse, or with your kids means you have a list of things you have to say “no” to? Really good things, things that you do for God. And you see the lights of your Jerusalem and simply sigh.

The Temple is where it’s going on.

And the flicker of those lights in Jerusalem reminds us that we’re way over here, not there.

Did you know that Caesar Augustus had choirs? Yeah, earthly choirs were used in the worship of the emperor. Augustus was particularly praised for having inaugurated a peace “for the whole world”! What would it be like to be near Caesar at that center of earthly power and authority, to see the famed buildings of the empire, to walk among the throngs of the populace as they devoted themselves to the welfare of a worldwide empire, and to hear the choirs lift their voices to honor the one, Augustus, who was hailed “lord” and “savior”?

Political power and privilege is where life is truly happening, right? We know that, like most of the world, we could spend our lives and energy pursuing that type of power and influence. But our faithfulness can mean we’re out here in the Judean countryside with stinky sheep and nothing to show for it.

And in the same region there were shepherds out in the field, keeping watch over their flock by night. And an angel of the Lord appeared to them, and the glory of the Lord shone around them, and they were filled with great fear. And the angel said to them, “Fear not, for behold, I bring you good news of great joy that will be for all the people. For unto you is born this day in the city of David a Savior, who is Christ the Lord. …”

The greatest event in human history to that point happened in obscurity, out in a field, to cultural nobodies. The mighty and privileged are actually the outsiders; the down and out are the insiders (Luke 1:51). God, in His infinite wisdom, thought the best way to announce the coming of the Son of God that would bring salvation to the world was to draw near to those that the political and religious rulers of the day dismissed. To draw near to the overlooked and the left-out, who are toiling in obscure faithfulness.

It’s as if God is saying to the despised shepherds, “Don’t ever think that your faithfulness means you’re left out of the worship of God. No! You will be the first to see the Lamb of God who takes away the sin of the world! Don’t look at the shining lights of Jerusalem. Don’t listen to the choirs of Rome.

I am inviting you into something far better than this world offers.”

Every person has fundamental questions they must have answered. Am I loved? Does God see me? Does God care about me? Do I matter?

It’s no coincidence that Jesus called Himself the Good Shepherd. Like those shepherds in Luke 2, Jesus also was a nobody. An outcast. Overlooked. He gets it. Deeply. Truly.

Just like with the shepherds, Jesus also understands what you’re going through. He sees you. You are not forgotten, even if so many days it feels like you’re faithfully toiling in obscurity.

This Christmas we all have various things we celebrate and enjoy and other things that weigh down our hearts. So I imagine it was for the shepherds 2,000 years ago, and so it will continue to be for all of us on this side of eternity.

There is so much that shines like Jerusalem at night and makes melody like Rome’s choirs. But those things are not what the human heart is truly looking for. And those places are not where we will find it. There are times our faithfulness leads us to lonely places, but we can be assured that, like the shepherds, we’ll find Jesus there.

This Christmas we join the shepherds, celebrating the world-transforming Good News of Emmanuel, God with us. This Christmas we fix our hearts and eyes upon that beautiful babe in a manger, surrounded by nobodies just like us.

While we may indeed be nobodies, Emmanuel is with us. And we will raise our voices with that multitude of the heavenly host, joyfully declaring “Glory to God in the highest!”