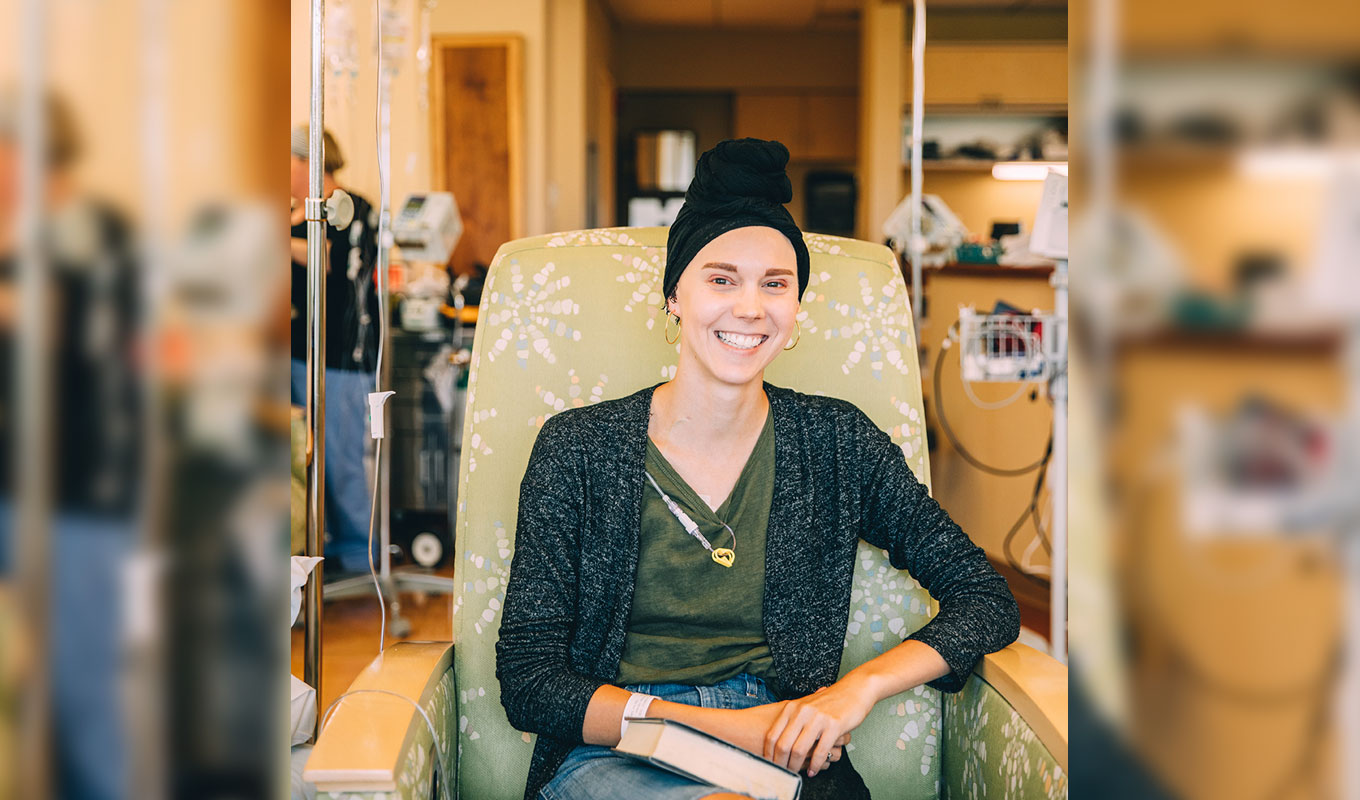 Kelsie Barnhart doesn’t think she would want to go back to “Kelsie before cancer.”

“I have a deeper appreciation for my life as it is,” she said during a break at Samaritan Ministries recently, her head wrapped in a scarf. “It may not look exactly how I want it, but I’m still here, still alive. I still get to spread the good news of the Lord.”

The 28-year-old Samaritan Needs Advocate, by all previous measures a healthy young woman, was diagnosed with aggressive breast cancer as a 27-year-old in December 2018. She underwent surgery in February 2019, had chemotherapy for 3½ months, radiation for 1½ months, and is now receiving maintenance infusion treatments. Then she’ll be on hormone blockers for five years.

But besides her deeper appreciation of life, she has a more intimate relationship with God.

“I relate to the Lord in a completely different way now,” Kelsie said.

It was difficult for a while, though. She had come to terms with being a woman in her 20s with a disease typically found in older women and was hoping she would be able to avoid chemo after the surgery. When surgeons went to remove her breast, though, they found a lymph node full of cancer as well. The “sentinel” node, the first to which cancer cells are likely to spread, was “visibly black,” showing that the cancer was spreading.

Plus, the cancer was determined to be HER2-positive, meaning the cells make too much of that protein and multiply quickly. Doctors recommended she get started right away with chemotherapy.

“It was very disorienting and discouraging to wake up and to be in that haze and to hear somebody telling you it had spread and the next year of your life is going to be full of treatment,” Kelsie said. “Everybody in my life had been praying that it wouldn’t spread. I had never asked to not have cancer, but I had asked to not have it spread.

“I lay in my bed and really hashed it out with the Lord, and what immediately came to mind was Jesus in the garden asking for the cup to pass and being told no. I remember the Lord really encouraging me and saying, ‘You’re in good company. You’ve asked, and that’s right and that’s good. It’s not a lack of faith, but you’re being told no, and that’s OK.’

“I think that interaction with the Lord, being able to come before Him and hear from Him in that way is honestly one of the sweetest gifts because I feel like that point in my story could have gone in two very different directions. It didn’t completely change the situation, and there were still many negatives to chemo and radiation, but it made it a lot easier to accept and to know that He still loved me. I’m still a daughter of the King. I’m still full of faith.

“I was disappointed, but I’m equally thankful, and OK that those things can co-exist.”

The Lord also let Kelsie know He was with her in other ways. Her biological family and church family “helped me tremendously.” When Kelsie was going through chemo, her mother, Kristine, would stop by her house daily to make or bring meals. Her parents would visit frequently, and family and friends took turns going for walks with Kelsie through the neighborhood. Her pastor, Tom Eckhardt, who is a cancer survivor, told Kelsie that she would feel the Lord’s presence “in the day to day of treatment.”

“I was well taken care of,” she said.

Other signs from the Father included a blanket with a ladybug design.

I relate to the Lord in a completely different way now.

“On your first day of chemo, they give you a blanket because the medicines are really cold when they enter you,” she said. “On the blanket was a ladybug design, which is so juvenile, and I don’t know why they gave that to me. But when I was growing up, my parents called me ‘Buglet,’ and my whole room was ladybug-themed throughout my childhood. The beginning of chemo can be a really scary day, but having that blanket handed to me was a clear sign that He was with me and that He was comforting me in a physical way and a spiritual way.”

Kelsie, who has been a Needs Advocate at Samaritan since 2017, said she also now feels she has better insight into the challenges faced by members going through cancer or facing other types of large financial needs.

“I have a better sense of knowing how their entire world has shifted in a moment and they’re dealing with things that they never expected to go through,” she said. “It’s just a continual reminder that we get to be the hands and feet of Jesus for one another, and we get to help each other not just financially but with encouragement. I think that’s such a beautiful aspect of Samaritan that I would never want to lose.

“Sometimes just being able to say to a member, ‘I’m sorry that you’re going through this, it’s honestly not fair, it was never designed to be this way from the design of the beginning of the world,’ I think that sometimes is still helpful for people to hear.”

Kelsie’s own experience as a Samaritan member has included large discounts.

Her treatment team recommended proton radiation in place of standard photon or X-ray therapy. Peoria facilities only have the latter, “but there’s a lot of scatter with it,” she said. “With my anatomy, it was going to really expose my lungs and my thyroid, and you can actually get secondary cancer from it.”

Northwestern Medicine Proton Center in Warrenville, Illinois, though, specializes in that therapy, which is more precise. It also, though, is newer and more expensive than photon therapy.

“You basically have to be accepted into it because they can only use it for so many people,” Kelsie said.

Some health insurance companies do not cover proton therapy because it’s still being developed. Kelsie, however, didn’t have that roadblock since Samaritan Guidelines allow it to be shared. Also, the original cost of $240,000 was discounted to $40,000 for upfront payment, which Kelsie was able to make by submitting written estimates so the expense could be shared before the treatment.

“Being cash pay is one of the reasons that process was able to be so streamlined,” Kelsie said.

“I’ve gotten a huge amount of chemo for free, straight from the manufacturer,” she said. “That’s because they’re looking at your income. If I had insurance, I don’t know if that would still be the case.”

Her infusion therapy has a list price of $56,000 per treatment. She’s getting 17, resulting in costs close to a million dollars, but the manufacturers are writing it off.

“If I had insurance, then I’d be paying a co-pay, or even a max deductible on all of this,” she said. “I can’t imagine doing that alone.”

She is reminded of that as she receives Shares from other Samaritan members.

“I’ve received 200 Shares and that is more valuable to me than the $200,000,” Kelsie said. “The fact that there are that many people who I’ve been able to thank and who have come alongside me in prayer is awesome.”