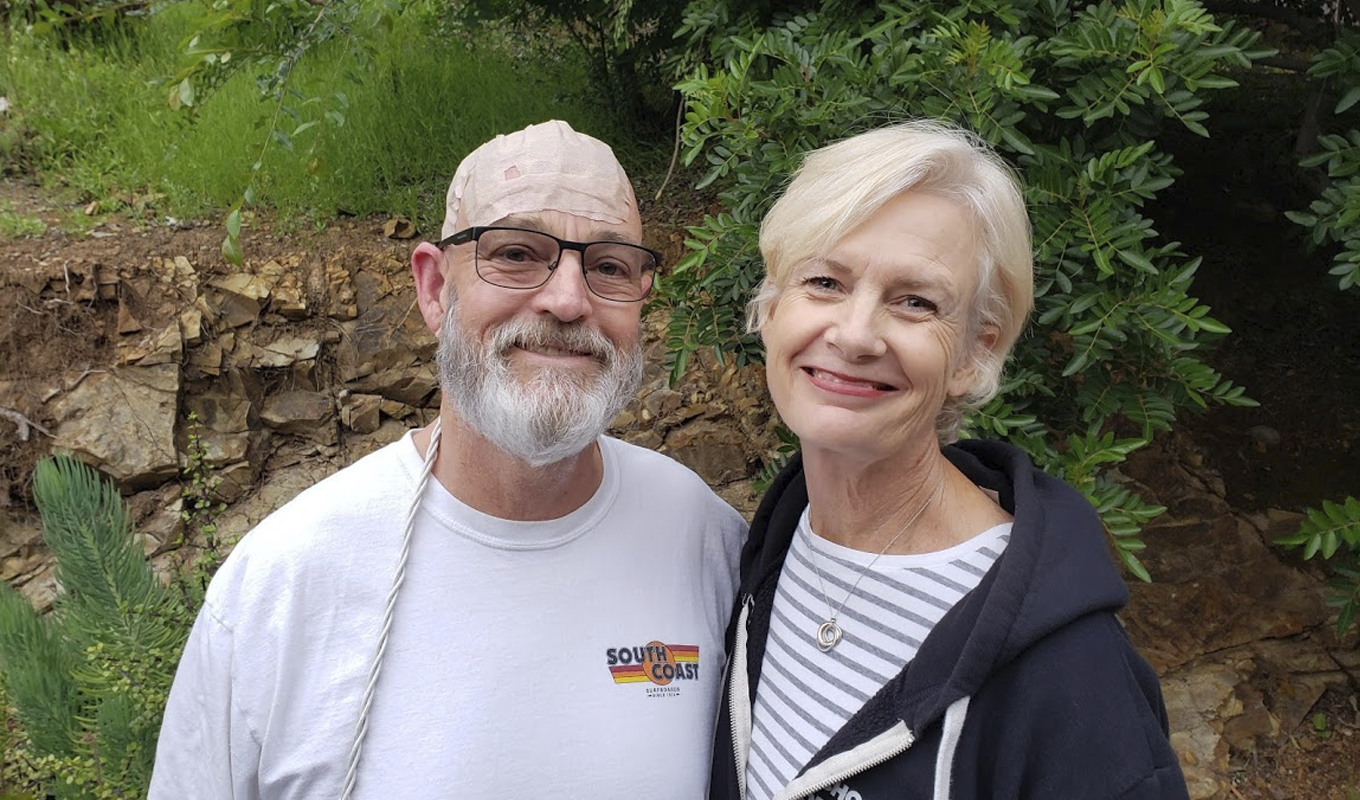 Jeff, 64, had surgery in 2018 to remove a glioblastoma multiforme grade 4 tumor. There is no cure. It can come back at any time.

“I remember last New Year’s, asking Jane, ‘In retrospect, would you change anything?’ If we could change one thing about what’s happened in the last couple years, would you change anything?’” Jeff said. “She’s like, ‘Nope, not a thing.’ I thought about it, too. It’s been the best two years of my life. I mean, glioblastoma and all. I wouldn’t change a thing. God’s used it to grow me. I trust Him more. I have a more intimate relationship with Him. Jane and I have always had a really strong and good marriage, but it’s just like over the top good now. We just couldn’t be happier.”

The Richards, who live in La Mesa, California, have grounded their hopes in Jesus, depending on Scripture, the Holy Spirit, fellow church members, and fellow Samaritan Ministries members to help them through a frightening but enlightening time.

“The only advice I have is stick your nose in your Bible and keep it there,” Jeff said. “You don’t know when you’re going to need it, but if you don’t make the deposit of the Word in your heart, it won’t be there for the Holy Spirit to pull it out when you need it. When I was getting prepped for surgery, I had no fear whatsoever. There was just one verse after another floating through my brain. So I think it’s just important to read the Word and take solace in it, because it’s true and God loves to reminded of His promises. Pray Scripture.”

Jeff ended up in surgery in November 2018 after experiencing symptoms of an unknown cause. His sleeping patterns went from not sleeping much to sleeping 12 hours a day. He started to lose motor function in his left hand slowly, resulting in typing problems, trouble playing the guitar, and problems using his phone.

It was after he fell asleep at work that it was clear he needed to see a doctor. He was given a neurological examination by his primary care physician, who pronounced him fit but wanted to have an MRI done just to be safe.

The imaging was performed that Sunday, November 11. Jeff was called during church services shortly after that. He had a “large mass” on the right side of his brain that was causing enough swelling to push his brain to the left by more than 7 centimeters.

It was off to the emergency department, where family members and church elders crowded into his room.

Hospital personnel said he was only allowed two visitors.

“Well, they came two by two,” Jeff told the officials.

Jeff had surgery on Monday evening, woke up Tuesday in the hospital’s intensive care unit, and was released Wednesday.

The good news was they were able to remove 100 percent of the tumor. The bad news was it was  glioblastoma, the most aggressive type of brain cancer. It grows into normal brain tissue through tiny branches. Most patients last little more than a year after surgery, but Jeff has made it 2½ years. He has received chemotherapy and radiation treatment and is now wearing an adhesive “cap” that emits electrical tumor treating fields, aimed at “confusing” cancer cell growth.

Jeff and Jane and their family have been blessed not just by Jeff’s survival but by their fellow members at Grace Church of East County as well.

The congregation’s elders approached Jeff after a Sunday service following his surgery and told him they thought it would be best if he would not work anymore, and that the church was willing to do what it could to support him and Jane. Church members have also paid for the Richards and their extended family to go on vacation together.

“So we’ve got dozens of families in the church that are supporting us,” Jeff said. “Sometimes the way God dotes on me, I feel like an only child.”

Samaritan members, meanwhile, have shared more than $284,000 in bills for his surgery and follow-up treatment, discounted from an original total of $574,000.

However, the Richardses are even more grateful for the prayer, which they credit for Jeff’s survival.

“I think the only reason I’m still here and doing so well and haven’t had any reoccurrence is because of the prayers of the saints, not just local, but Samaritan members all over the world praying for me,” Jeff said.

“At the beginning, one of your advocates, man—I don’t know how many times I’ve called him on the phone, but he just held my hand through the whole thing,” Jane continued. “Samaritan has been great. I’ve gotten every question answered. Not only that, we get the prayers from everybody. People can’t believe we’ve got others praying for us in Omaha or wherever who don’t even know us. And I have a huge file of cards.

“We share what Samaritan has done and what it’s continuing to do with everyone we encounter at our medical facility, and they just can’t believe it. It’s such a testimony to how God’s people can work together and care for each other. They don’t understand health care sharing, so we get to explain it and go into more depth.”

The couple is in wait-and-see mode right now, getting new MRIs every other month. Jeff has regained most of his left-side function, typing and playing guitar again. And he has some slight balance symptoms but wasn’t planning to go skateboarding or surfing any time soon anyway, he said.

“I get fatigued sometimes when I’ve had a long day, but all in all, I feel pretty good,” Jeff said.

“We just pray for no new growth,” Jane added. “That’s our prayer.”