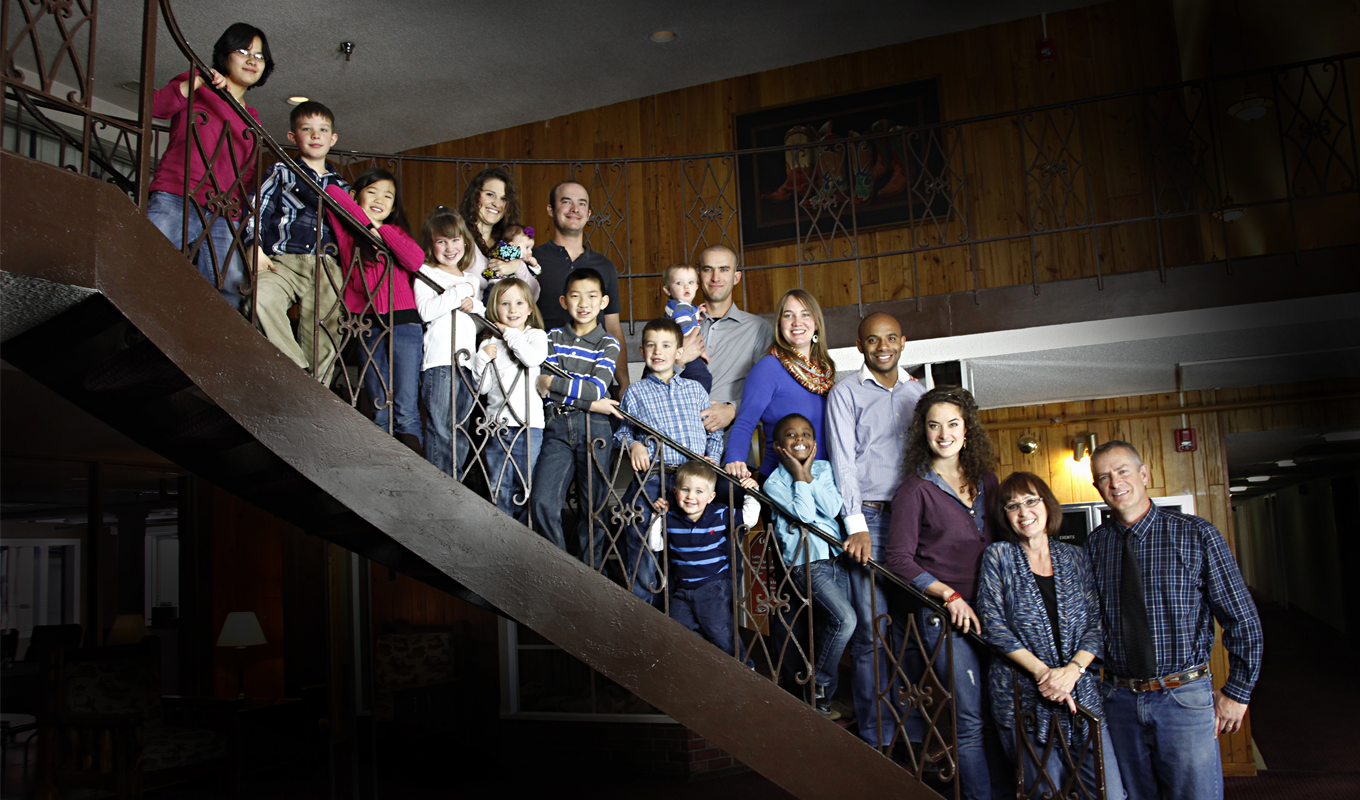 Foster and adoptive families can 'shine Jesus's light into lives'

In January, we celebrated Sanctity of Human Life Month by offering some stories of adoption and fostering. This month, we share the rest of the stories.

While these are stories of love and grace, we also realize that many situations involving adoption and foster families are full of struggles and even heartbreak. Please pray for all these situations.

Missionaries Richard and Starla Kull were dealing with an empty nest when their four biological children had headed back to the States in the early 2000s from Mexico, so they decided to repopulate it. Still serving as church planters in Mexico, the Kulls adopted three children from China starting in 2004: a 1-year-old girl, then a 4-year-old boy, then a 12-year-old girl. They moved back to the United States in 2009 when they realized the girl they had just adopted “was never going to learn English living in a Spanish-speaking country!” Starla said.

But the Kulls were just getting started taking care of children in need at that point. After settling in Casper, Wyoming, and hearing about the need for Christian foster parents, they made their home available. Starting in 2010, they hosted 95 foster children over the next several years. Some were long term and some short term.

“One of the hardest things is sending a child on,” Starla said. “We had a 2-day-old baby right out of the hospital to over a year old and would have loved to have kept her. It is hard, very hard.”

But fostering and adopting have multiple rewards, too, she said.

“What God calls us to do is to stand up for the fatherless,” Starla said. “It’s more than being anti-abortion. ‘Pro-life’ means that once a mom in need has had a child, it’s a huge ministry to reach out and help the mom and child.”

Although the Kulls are no longer hosting foster children, they still help families that do. Starla is a court-appointed special advocate for some children. And foster families can always benefit from offers of help with meals, babysitting, or rides, depending on the circumstances.

Best of all, the Kulls were able to “shine Jesus’s light into their lives.” Many of their foster children went to church and AWANA and learned Bible verses. The children they adopted have grown into adults who “love the Lord and want to follow Him in everything they do.”

Fostering children is something Aaron and Sarah Cleveland always felt called to do, so they did, hosting 15 children over eight years.

“We just couldn’t stand the thought of kids in foster care without a good mom and dad and family life,” Sarah says. “And, as Christians, we understood the command to rescue and care for the orphan. Our desire was to help local kiddos through our willingness to adopt if that’s what the Lord had in store for us.”

But the process has been anything but seamless as the foster care system in their state is riddled with problems, Sarah says. Foster children are often reunited with their biological families for questionable reasons by the state, she says. But those situations often can be abusive and dangerous, and children end up being taken back out of the home. A cycle of in and out of the home becomes normal.

Many of the Clevelands’ foster kids were in and out of their homes and placed with Sarah and her husband on more than one occasion. Because of their experience, the Clevelands have also become more involved in advocacy work and local politics, and with other foster families who have experienced some of the same challenges.

Despite the many flaws and frustrations, Sarah and Aaron have enjoyed rich blessings like the hugs the kids give them or being called mommy or daddy. They’ve also enjoyed watching their own children exercise compassion and mercy.

“I know we have planted seeds in their little lives for the better,” Sarah says. “They have been introduced to Jesus.”

Adoption was already on both of the Coopers’ radars. Terry has a sister who had adopted and Tricia was adopted by her stepfather, who raised her. When the Coopers got married, they felt that God was leading them to adopt at some point, but they anticipated it would be “down the road,” after having biological children first.

After several years of trying to have children, Terry and Tricia started bringing adoption to the forefront. They had a “very good experience” with Texas Child Protective Services, Tricia says. They were matched with 14-month-old Colton.

A few years later, they were wondering if they should adopt again when, to their doctors’ surprise, Tricia became pregnant. They were blessed with two biological children, Codee, now 15, and Carlee, now 14, in addition to Colton, who is now 22.

Even still, the desire to adopt again is there for the Coopers.

“One day we’d like to adopt a teenager,” Tricia says. “We know there’s this huge need out there for older kids to get adopted. Sometimes once they get to a certain age, it almost seems hopeless for them because they just never connected and matched with a family.”

When a teenager is adopted, it means one fewer child ages out of the system, instead of having a home and parents they can turn to, she adds.

“This is such a calling on our hearts, and it’s part of being pro-life,” Tricia says. “Yes, we are against abortion and we advocate human rights within the womb, but we do think there’s this huge responsibility as Christians to take care of orphans.”

Daniel and Stephanie Hostetler serve as foster parents, but not with the intent to adopt. Instead, their goal is to keep a child in a relationship with his parent or parents while they get their life back on track.

“We’re not saying we would never adopt,” Stephanie says, “but right now we feel like fostering is the way we can be the hands and feet of Jesus.” She adds that one of the blessings of fostering has been that it’s something in which the entire family—they have three children, ages 9-12—participates.

In August 2020, they started fostering E., a baby boy who was 7 months old at the time.

The Hostetlers are also active in the life of E.’s mother, which is something they decided to do from the beginning, Stephanie says.

“One thing we’ve really done with E.’s mom is to encourage and affirm her in her role as a mom,” Stephanie says. One example of this is that two months after E. came to live with the Hostetlers, they asked a photographer friend to do a “9 months old” photoshoot of E. and his mom.

“If a mom actually has a child instead of having an abortion, then we as Christians should be there to help them through the rough spots,” Stephanie says. “We’re in this for the little children that are in our home, but we’re in it for their parents, too. We can be there to help them and encourage them to make good choices if they’re willing to listen to input.

“We feel like we can be there to say, ‘Hey, you made the right choice. You had this baby. Now we’re going to help you provide a safe place for him right now so you can get your life stable, get back on your feet, and get the little guy back.’ That would be our goal—that he would be able to go back to his mom,” Stephanie adds.

One of the reasons the Hostetlers decided to foster was to say thank you to God for healing in their lives. Both Daniel and Stephanie have suffered from and then been healed of Lyme disease over the past several years.

“For us, fostering is a way of outreach that we as a family can do as a way of saying thank you to God for the blessing He has given us with our health,” Stephanie says. “It’s been so amazing for us to see how God has provided healing so that we can reach out and minister in this way in the community here.”