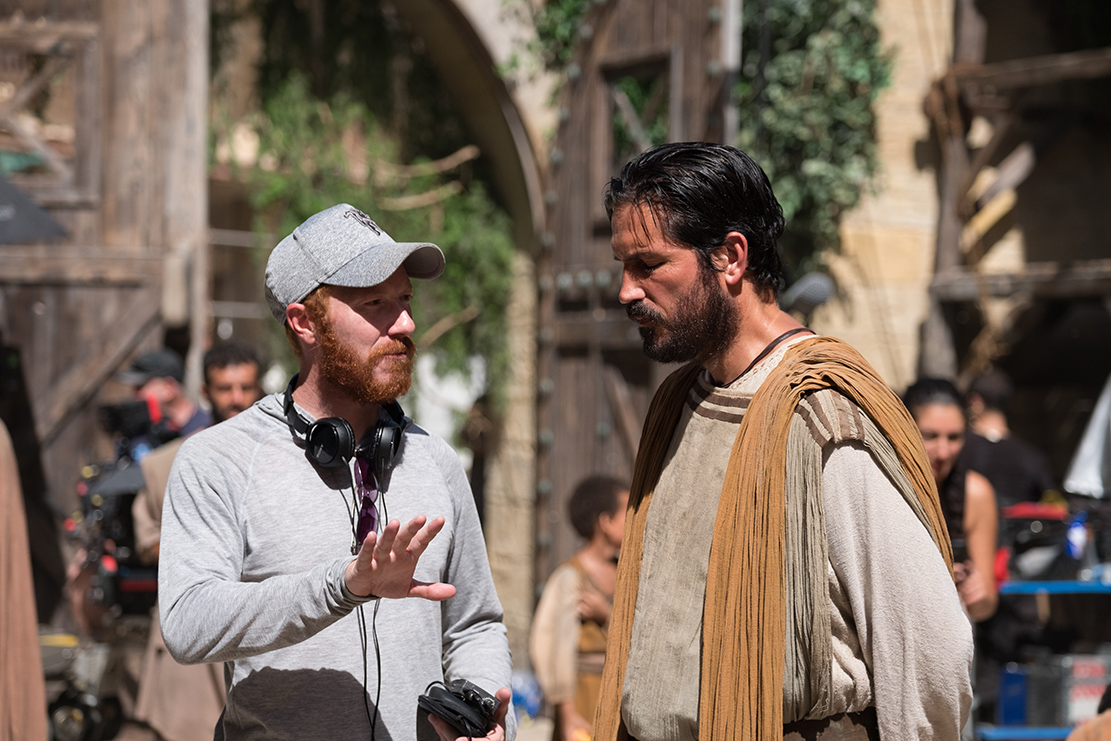 Member Andrew Hyatt is writer and director of the new 'Paul, Apostle of Christ' film

Samaritan Ministries member Andrew Hyatt hopes his new movie, Paul, Apostle of Christ, is as important to the audience as it is to its creators.

“It’s a film by people who are very passionate about this story, which isn’t always the case with Hollywood films on the Bible,” the film’s writer and director says. “The message at the heart of this is the idea of love and grace and mercy, these beautiful Pauline themes that we’re all so familiar with.”

Andrew spoke by phone from Sony facilities in California, where he was putting the final touches on the film. Paul, Apostle of Christ will premiere nationwide on Friday, March 23.

Starring in the film are James Faulkner (Downton Abbey, Game of Thrones) as Paul, Jim Caviezel (The Passion of the Christ, Person of Interest) as Luke, Olivier Martinez (S.W.A.T.) as a Roman prefect, Joanne Whalley (A.D.—The Bible Continues) as Priscilla, and John Lynch (The Secret Garden) as Aquila.

Paul is Andrew’s second Bible-based film in a row after directing two other films. His most recent work was Full of Grace, about the last days of Mary, the mother of Christ.

Not bad for someone who said he never wanted to make any Christian films.

“I was very clear about that,” he says. “But I had a very strong reconversion to the faith. It was like God saying, ‘How could you not tell these stories?’ I’m grateful and humble to be a part of that, to be able to tell such great stories about these incredible figures.”

“He lived about 10 lives,” Andrew says. “I knew we couldn’t do an A-to-Z Paul story. That would be better served as a 10-part miniseries.”

But the writer-director kept coming back to who Paul was at the end of his life while awaiting execution in Rome, playing off 2 Timothy 4:11, where Paul writes, “Only Luke is with me.” Andrew asked “Who was that Paul?”

“This is about 66, 67 A.D. He’s awaiting execution and Luke comes sneaking into Rome, trying to bring some joy to Paul,” Andrew says. “We came out with this beautiful Paul being able to share in his last days his story. We’re able to kind of say this is where the Acts of the Apostles was inspired.”

This is Jim Caviezel’s first Scripture-based movie since he portrayed Jesus in The Passion of the Christ, which also is one of Andrew’s favorite Bible films.

“I remember seeing that film and couldn’t help but feel that world was opened up to me in a way that it never was before,” Andrew says. “The way that Mel Gibson did that film, so visual and real and authentic, you couldn’t help but be moved to a deeper understanding of what Christ did for us. It blew me away.”

Other major characters, besides Caviezel’s Luke, are Priscilla and Aquila, and a fictional Roman prison prefect.

The character of the prison prefect, Mauritius, is “sort of this combination of all these Roman figures that ran into Paul during his journeys,” Andrew says. “We noticed a kind of theme of these people who totally believed in Roman gods or Greek gods, and then they encounter Paul and they can’t help but be changed.

“Mauritius encounters Christ through Paul, and it’s a beautiful journey that he has to go on to get there.”

Andrew and his crew also strove to make a movie that not only looks authentic as first-century Rome but feels authentic spiritually.

“We never wanted any moment that felt preachy,” he says. “Everything has an authenticity to it. When you hear Paul’s words and what he wrote, the violence of Nero, when you hear them in the context of what these early Christians were going through, it’s hard to argue these aren’t things that hit us all deeply. Don’t we all want to feel that there’s something bigger and greater than us Who loves us? These are things that touch our deepest kind of humanity, whether you’re Christian or not. I think that anybody can see this film and think about their faith or nonfaith, and hopefully feel encouraged to pursue the faith more.”

Andrew encourages believers to take non-Christian friends to the film.

“Bring people you may be uncomfortable sharing the Gospel with,” he says. “As much as it’s about our faith, it’s a great story. It’s an opportunity to open a dialogue. I really believe it’ll cause people to think deeply about where they’re at in life.”